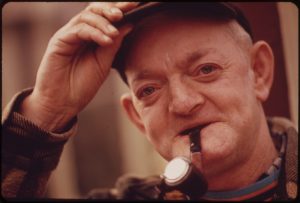 “How do you say ‘the horse died’ in Yiddish?” asked the African-American panhandler to whom I had given a quarter when he accosted me in lower Manhattan. It was many years ago, shortly after I moved to New York. A bit taken aback (would you not have been?) by the unexpected quiz, I responded “Der ferd iz geshtarben.”

“No,” he insisted. “A mensch shtarbt. A ferd paigert.” He was right, of course. The Yiddish verb for “died” is different for a human and for an animal.

New York, I remember thinking, is an interesting place.

I never found out how my interlocutor knew Yiddish so well, but, over the ensuing years, I have met many, if less interesting, seekers of alms.

When I first began working in “the city,” as an out-of-towner unaccustomed to street beggars, I made a point of giving a coin or two to each of the bedraggled people on my route who shook a cup of coins or asked passers-by for a donation. Chazal, after all, teach us to provide charity to all (Gittin 61a).

Rightly or wrongly, though, I eventually came to stop that practice. There were the times when, after my small donation to an indigent person, I was besieged by theretofore hidden others who, having witnessed my largess, suddenly and magically appeared to stake their own claims. I would have had to carry a bag of quarters each day.

And I came to realize, too, that there are an abundance of agencies and charities that provide food and shelter for the homeless. I wondered what “extras” the coins and bills in the cups would end up purchasing. Candy bars? Cigarettes? Drugs?

And so, for better or worse, I joined the overwhelming majority of New Yorkers, who go about their business without acknowledging the sound of shaken change or the repeated mantras of “got any spare change?” But I felt (and feel) bad. I was still ignoring human beings. That’s not something a descendant of Avraham Avinu should be able to do nonchalantly. True, the solicitors don’t seem to mind being ignored by so many, and are seemingly happy with the “business” of the ever-present tourists. But still.

One day not long ago, though, an elderly man sitting on the sidewalk and asking passersby for change focused on me as I approached where he sat. “Rabbi!” he called out. “Got anything for me?”

Having been so (somewhat) personally addressed, I had to interrupt my brisk walking. In Manhattan, that can be dangerous; those behind you are often inhabiting alternate worlds, talking on phones or pecking out emails as they walk. By stopping short, one can cause the pedestrian version of a vehicular pile-up. Luckily, though, the foot traffic behind me must have naturally noted my braking, since it just flowed smoothly around me.

I wasn’t, though, about to change my callous custom. So I just bent down to smile at the fellow and tell him that I don’t generally carry cash (which by then was true) but that I wished him a wonderful day.

I can tell a sincere smile from a contrived one, and the one he returned was the real thing. And along with it came, without a hint of cynicism, a “thank you.”

Whenever I see the fellow in his spot, I make a point of addressing him, just to smile and wish him a good day. And each time I do, he seems genuinely pleased. Sometimes, he even beats me to the greeting. He doesn’t ever ask me for money.

The Gemara in Berachos (6b) quotes Rav Chalbo in the name of Rav Huna as saying: “Anyone who is greeted and does not return the greeting is called a thief.” His source is a passuk in Yeshayahu (3:14): “The theft of the poor man is in your house.” Rashi explains that a poor person has no possessions to steal, and so the thievery referred to must be a greeting owed him, of which he was deprived.

Presumably, if an unreturned greeting is a theft, an offered one is a gift. My indigent friend certainly appreciates that fact.

Greeting every person we pass throughout the day isn’t very practical, and would seem eccentric. In some cases, personal interactions might even be inappropriate. But in so many others, the opposite is true. The hurried nature of modern life shouldn’t obscure the testimony of Rabbi Yochanan ben Zakkai (Brachos 17a), that no one ever beat him to a greeting, as he was always first to offer one, “even [to] a non-Jew in the marketplace.”