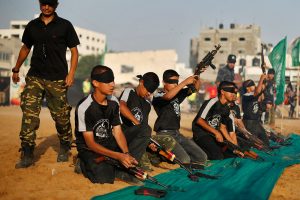 There are all sorts of summer camps.

Most familiar to most of us are summer youth experiences like Camp Agudah’s various branch-camps and the broad assortment of others like them.

They combine Torah-study and stress on Jewish ideals like chessed and tefillah with sports activities and arts and crafts. Spirits are famously high in such camps, lifelong friendships are made and many a successful Jewish adult credits his or her love for things Jewish and for other Jews on their formative camp experiences.

Moving a few thousand miles east from the Jewish camps, there are summer offerings, too, for young people in Gaza, like the “Pioneers of Liberation” camps. Run by Hamas’s Izz Al-Din Al-Qassam Brigades, the camps are dedicated to the “Al-Quds Intifada,” the Palestinian name for the most recent wave of knife, shooting and vehicular attacks against Israelis in Yerushalayim and elsewhere.

During the Gaza summer camps’ two-week stint, some 30,000 (you read that right) children enjoyed their camp experience. As Jewish youth here in America were taught water safety, wrote skits and cantatas and composed and heard divrei Torah, Gazan youths received firearms training, instruction in how to use knives to kill civilians, religious indoctrination (with jihad a major theme) and lessons on “battle heritage.”

“The goal of the [Hamas] camps,” according to an administrator, is “to stoke the embers of jihad among the generation of liberation, to inculcate Islamic values and to prepare the army of victory for liberating Palestine.”

There were conflicts in the Jewish camps, too, like water fights and color wars.

Each of the Gazan camps is named after a terrorist or terrorist “operation.” One is called “Knife Camp,” referring to the stabbings that took place this past year in Yerushalayim. Another camp is named in honor of Baha Aliyan, who, along with an accomplice, shot and stabbed passengers on an Egged bus last October, killing three and wounding nine.

Jewish campers, as every year, were enthusiastic about the the unity they felt with their fellow campers and the caring mentorship of their counselors. As Tisha B’Av came closer, the spirit of mourning over the batei mikdash was intermingled with yearning for the Geulah sheleimah and realization of the tefillah of “Sim shalom.”

Over in Gaza, the enthusiasm was for other things. One camper, Ahmad Sami, explained his reason for enrolling as his “intense desire to join the ranks of the resistance in the future” and “to participate in liberating Palestine from the occupation.”

Ibrahim Al-Madhoun, a columnist for the Hamas-run Al-Risalah wrote: “Our Palestinian people are jihad fighters by nature, who rise up and aspire to take part in armed combat… These camps will lay the foundations for building a broad popular army…”

In Jewish camps, the calm of Shabbos descended each Friday night, and the tefillos were unhurried and heartfelt. “Hapores sukkas shalom aleinu v’al kol amo Yisrael v’al Yerushalayim” led into the amidah.

In one Gaza camp, there was an exhibition of weapons used against Israel, including sniper guns, mortars, anti-tank mines, short-range Qassam rockets (types 1, 2 and 3) and longer-range rockets (type M75, R160 and J80).

Visiting day is always a special time, for both campers and their parents and families. In the Gaza camps, visitors were invited to tour a tunnel dug especially for training the camp’s young charges.

Camp Agudah was abuzz this summer when members of the Moetzes Gedolei HaTorah gathered at the camp for a meeting. Great kavod was shown the Jewish leaders.

One of the chavrei Moetzes, Harav Yosef Frankel, the Vyelepoler Rebbe, shlita, recalled to the campers his time as camper himself, and stressed to his listeners the importance of acts of kindness toward one another. Harav Shmuel Kamenetsky, shlita, stressed the need for campers to feel and express gratitude to their counselors and teachers, and to their parents for sending them to camp.

Hamas camps had special visitors too, like Hamas leader Mahmoud Al-Zahar, who has urged Arabs to kill Jews. “We are no weaker or less honorable than the peoples [in the past] that expelled and annihilated the Jews,” he has explained. “We have,” he said, addressing the Jewish people, “learned the lesson – there is no place for you among us, and you have no future among the nations of the world. You are headed to annihilation.”

Hamas interior minister Fathi Hamad also (dis)graced one of the Gazan camps. He famously once declared that “The Jews have become abhorred and loathed outcasts, because they live off corruption and the plundering of… all the peoples of the world.”