Better Than Your Grandmother’s Lashon Hora 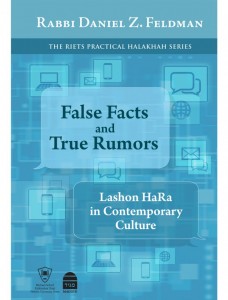 “If it ain’t broke, don’t fix it” may generally be sound advice, but it happily has been ignored in regard to classic Torah works. The last decades have seen a steady stream of improvements and enhancements of seforim whose utility no one doubted. Type was reset, errors corrected, indices added. More importantly, extensive notes were compiled, allowing easy access to discussion that most would otherwise not know about.

Still, there were some works which we imagined were so well done, that saying more than they did would be saying less. One of those was Sefer Chofetz Chaim.

For most of us, the Chofetz Chaim’s seforim have been the beginning and end of what we know halachically about lashon hora. Recognizing the need to address these orphaned areas of halachah took a combination of piety and vision; delivering a halachic work that knew no competitor took the special touch of a massive talmid chacham. No one had dealt with these issues before, and it was unlikely that anyone would have anything further to say. No one did it before, and no one did it better.

So goes the customary wisdom, which turns out to be entirely incorrect. The part about the greatness of the Chofetz Chaim of course is true, and even understated. But he was not the first to write extensively. Neither was he the last. Now there is a way to gain access to the wealth of supplemental material – in most cases building on the contribution of the Choftez Chaim – by way of a fascinating new sefer, False Facts and True Rumors, by Rabbi Daniel Feldman, a gifted young rosh yeshiva at YU, shul rov in Teaneck, and author of a number of other high-quality seforim on halachah.

The book’s subtitle, “Lashon HaRa in Contemporary Culture,” suggests that it will offer the reader insights into application of hilchos lashon hora to conditions and institutions that were not around in the time of the Chofetz Chaim, who died in 1933. Indeed it does, offering extensive treatment of issues relating to journalism in general, the internet, social media, political campaigning, and the therapeutic setting. Rabbi Feldman continues along a path he set for himself in his previous works, humbly avoiding stating his own conclusions in favor of marshalling written material from a breathtakingly comprehensive knowledge of what is available.

It turns out, though, that the front-burner topics are not the bulk of what makes the sefer “contemporary,” but two other contributions. The first of these can only be appreciated by noting its first recorded instance, which took place between Yaakov Avinu and his wives. Clued in by an angel that the time was ripe for a change in employment (Bereishis 31:12-13), Yaakov calls for a family council. They discuss the pros and cons of seeking a change of venue. Profitability has peaked. They’ve all been cut out of the will, so nothing is to be gained by hanging around and smiling at the relatives who hate them. Said relatives have recently been making warring noises in their direction. And – how could we forget? – G-d Himself suggests making the move, so why not comply?

Rav Eliyahu Lopian zt’l is puzzled by their moving a Divine directive to the bottom of the pile of considerations. Should it not have been the first – and only – factor worth considering?

Not really, he says. Of course, the bottom line is that we will eagerly listen to what He has to say. But wherever possible, he continues, we should endeavor to demonstrate to ourselves the wisdom of His directives. Yaakov and family were prepared to instantly respond to marching orders from on high. They first took the time, however, to note the advantages of Hashem’s plan for them, and to realize that were it not for His intervention, they would have stayed in an unsafe, unhealthy environment for too long. This, suggests R. Lopian, is something we all ought to do. We should stop to ponder the wisdom of the Torah’s guidance, and the beauty of the life style that it presents to us.

One huge contribution of this sefer is just such a consideration of the laws of lashon hora. Many people, including non-Jews, have spoken glowingly about a system of interpersonal laws that eschews character assassination, slander, and gossip, and paints a dismal picture of those who would talk about people, rather than ideas. Rabbi Feldman goes well beyond that. He examines the halachos of speech in all their nuance and complexity, and shows how decades of social research support not just the general thrust of halachah, but the specific components of the law as well. Why is lashon hora harmful? Whom does it harm – the target, the speaker, or society? Why does the Torah deal so severely with speech that is not defamatory, but entirely true?

His approach to the last question is both illustrative and intriguing. He notes that the prohibition of accepting lashon hora as true is sourced on a verse (Shemos 23:1) “You shall not bear a shav report.” Many understand shav as “unnecessary.” This is entirely consistent with the general view that uncomplimentary but true information should not be conveyed unless it is justifiably needed by the listener. At that point, it becomes “necessary.” A number of important commentators, however, see shav to mean “false,” seemingly at odds with what we were all taught (correctly) is accepted halachah. Is there some sort of fundamental dispute here?

Not really, says Rabbi Feldman. “If the speaker is stating the facts, is the listener actually hearing the truth?” he asks. He then answers his (rhetorical) question with an avalanche of opinions and studies. We learn about research – not armchair musings – about subjectivity, the fallibility of memory, overconfidence and assertiveness. We become familiar with the “fundamental attribution error,” or the demonstrated phenomenon of processing information differently in regard to others than we would about ourselves. We read about “availability bias,” the “devil effect,” “confirmation bias,” “anchoring,” “group polarization, “and disproportional impact.” All of them add to our understanding of why, in part, the Torah may have banned speech that is true. There may be less objective truth in its report than the Torah is comfortable with. “The lashon hara prohibition may be premised upon the assumption that even true information can create a false picture of an individual.”

In other words, we learn through modern social science that facts can be false. While we never need anything external to Torah to validate it (nor can the temporal and finite ever validate the timeless and infinite), doing what Yaakov did can get us to add increased luster to our perception of its brilliance. To get to this point, Rabbi Feldman combed through and absorbed a massive amount of reading, well beyond the reach of virtually all of his readers. This sefer is not a short-cut, a time-saver, to make it easier to quickly find material we would be able to do on our own. Rather, he opens up new vistas to his audience.

Had Rabbi Feldman not chosen to make secular knowledge the handmaiden of Torah in his work but skipped it altogether, he would still have produced an attractive work for the traditionalist, simply because he is a talmid chacham with great research skill. Therein, his second contribution: copious halachic material to augment that of the Chofetz Chaim. He cites scores of halachah journals, responsa literature (including the extensive work of R Nissim Karelitz, shlit”a), hashkafic material. Many of these sources are so hard to find that they are not even available on Otzar HaChochmah, the most substantial online repository out there. He makes us consider questions that we may or may not have thought of through several reviews of Sefer Chofetz Chaim – and would generally have been stymied had we decided to pursue them. Is it permissible to intentionally witness someone’s misdeed? Can one lie in order to avoid speaking lashon hora? Is lashon hora a deficiency in the character of the speaker, or a proscribed behavior? Is it both? Is lashon hora-for-cause (to’eles) permitted because the need outweighs the potential harm, or because if it is justified, it simply does not fall under the rubric of lashon hora? Is there a need-to-know about public figures? Are distributors culpable for lashon hora in newspapers?

There is sweet irony in this sefer. Some five hundred years ago, the Shulchan Aruch quickly positioned itself to become a kind of last word in practical halachah. Of course, despite its larger-than-life importance in the life of every observant Jew, it was not the last word. Much had to be fleshed out, defended, disputed. Many issues that were not included were addressed by literally thousands of authors in the following centuries. It took the work of a single gifted talmid chacham to take the work of centuries and integrate it with the text of the Shulchan Aruch. The utility of Shulchan Aruch – at least Orach Chaim, the quarter of it that deals with the daily and yearly cycles – was restored by none other than the Chofetz Chaim, when he wrote the Mishnah Berurah. Now Rabbi Feldman has performed the comparable service for the Chofetz Chaim’s own work on permissible and forbidden speech. He has not replaced it chas v’shalom, but expanded its usefulness to us by citing so much of what has been written by others, as well as by offering a modern appreciation of its tenets.

I suspect that the Chofetz Chaim himself is pleased, and there can be no better berachah to Rabbi Feldman than that!