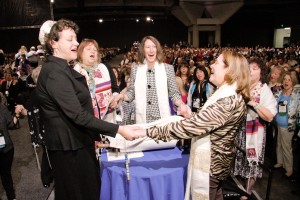 The current efforts of the Reform-Conservative movements to gain a foothold in Israel are ludicrous. The Israeli Orthodox, they claim, have a “stranglehold” on religious life, and therefore we must introduce “egalitarian” prayers, mixed gender synagogues, looser practices in marriage and conversion laws, and thus create a new renaissance of religious life in the Holy Land.

Use of the word “ludicrous” is unavoidable when viewing some statistics. The Reform-Conservative brand has been dominant in American Jewish life for most of the 20th century, when the vast majority of affiliated American Jews were affiliated with them. It is instructive to examine what these groups achieved in America after a century of dominance. Let us look at the record. The just-issued Pew study provides a glimpse of American Jewish life today:

What we have here is a stark picture of the disintegration of American Jewry with the exception of the Orthodox.

Granted, one cannot blame only these dissident movements for these abysmal numbers. Certainly, other factors were involved . Nevertheless, these statistics are mute testimony to the failure of an ideology that controlled Jewish religious life in America. All their efforts to streamline Torah and mitzvos have ended in bankruptcy, not only for Jewish religious life in general America, but for these movements themselves in particular. They are gradually losing ground in America, unable to retain their young people, and are facing dwindling institutional membership.

But instead of engaging in an honest self-critique, they now wish to export their failures to Israel! Would anyone follow a general who abjectly surrendered in all major wars , and now insists on leading his troops into yet another battle? Having lost the war in America, they now propose to lead the charge in Israel. This is comic bordering on the absurd. The masses of American non- Orthodox Jews have roundly rejected their nostrums; does their leadership really assume that the much more tough-minded Israelis will accept them with open arms? Do they really think that Israelis are gullible enough to purchase damaged goods?

The Reform-Conservative leaders are not naïve. They know that Israelis will not accept them. But no matter; they are counting on their allies in the media and the Supreme Court to aid and abet them. It cannot be that these Israeli elites are so blind as not to see the abject failure of these ideologies in America. They are intelligent, and know full well that “egalitarian” prayers at the Kotel, with women reading from the Torah while wearing cute little kippot on their well-coiffed heads, are a joke. But they make for good newspaper copy and TV pictures. That all this is not religious but is instead unabashed political theater, and that the masses of Israelis see right through the charade, is of no consequence.

As for the Court’s support of this bankrupt agenda, the watering down of halakhic norms does not concern them. Intermarriage, assimilation, dilution of Torah norms – these are not only unobjectionable but are, for some justices, quite desirable outcomes. Whatever will loosen the hold of the religious “primitives” in Israel is a step forward. They would welcome the Pew results in Israel.

With the help of anti-Orthodox elements in Israel, and with their vast resources of money, the Reform-Conservatives might gain a certain small foothold in Israel. But it will be only a pyrrhic political foothold, not a lasting religious one, because the masses of Israelis, even the non-observant ones, realize that this is only a bad Purim masquerade. For the same Pew survey shows that the vast majority of Israeli Jews identify with the Orthodox. Among secular Israelis, 5% identify with Reform, 2% with the Conservative movement. A full 23% of secular Jews align themselves with the Orthodox. In brief, the Israeli public was not born yesterday. They may not be observant, but in their hearts they know the difference between genuine and ersatz.

As with all masquerades, the masks must eventually come off. There is only one hope for the Reform-Conservatives. They must fully return to basic Jewish themes – unadulterated prayer, serious commitment to mitzvos, belief in Gd, intensive study of Torah, and less attention to PR . Then their fortunes might increase. And if that would make them Orthodox, so what? I can’t think of a better gimmick.