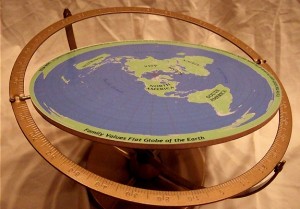 You just can’t, as they say, make this stuff up.

A performer recently made news by implying that 1) Holocaust denier David Irving deserves reconsideration, and 2) that the earth is flat.

The entertainer didn’t offer those two wise thoughts as part of a comedy routine, but in a serious, assertive manner, using the medium of “rap” – a genre that some people consider music (count me among the deniers there).

“Stalin was way worse than Hitler,” the fellow also declared. “That’s why the POTUS gotta wear a kippah.” POTUS, of course, in secret service-speak, means “president of the United States” and kippah means… well, you know. If you’re looking for logic, even of the paranoid variety, you might wish to look elsewhere.

Someone else also recently made news about his own Holocaust views. That would be Professor Yair Auron, an Israeli historian several million light years removed, culturally, from the flat-earth rapper. In a way, though, Mr. Auron is the more hazardous of the two.

The professor is upset at the Israeli educational system for teaching that the Nazis’ determination to destroy every vestige of the Jewish people is something uniquely Jewish.

He accuses Holocaust educators of repressing or minimizing the suffering of others targeted by the Nazis, and is upset that other mass murders are not placed on a plane with the Nazis’ attempted destruction of Klal Yisrael.

“It must be asked,” he said recently, “if, in Israel in 2016, instead of also shaping Holocaust commemoration through humanist and democratic values… [is] fostering racism and xenophobia… Ignoring the non-Jewish victims is perhaps the most concrete manifestation of this trend.”

No one, of course, denies that the Nazis killed thousands of Communists, mentally disabled, Gypsies, criminals and others. Nor that mass slaughters of human beings were committed by Stalin in the Soviet Union, by Pol Pot in Cambodia, by the Turks against the Armenians and by the Hutu tribe against the Tutsi and moderate Hutus in Rwanda. And those outrages all deserve to be remembered.

But to contend that it’s somehow wrong to stress the singular hatred Hitler, ym”s, had for Jews, and his determination to destroy our people in toto is to reveal the deepest of delusions. And fostering that delusion is a Holocaust revision of its own.

Determination to create a world that would be Judenrein – free of Jews – was the Nazis’ first and foremost goal. They may have had no compunctions about killing others they felt were detrimental to the Third Reich – political opponents, the non-productive, those they deemed “asocial.” But they didn’t seek a Gypsyrein world or a disabledrein one. The Nazi quest was to clear the world, not just Germany, of Jews; and it was a deep and abiding obsession, a psychopathy clothed in philosophical/theological garb.

Hitler revealed as much in Mein Kampf, where he wrote: “If… the Jew is victorious over the other peoples of the world, his crown will be the funeral wreath of humanity and this planet will, as it did thousands of years ago, move through the ether devoid of men…”

Even as he and his companion were about to commit suicide, on April 29, 1945, at 4 a.m. the fading führer issued a statement declaring “Above all, I charge the leadership of the nation and their followers with… merciless resistance against the universal poisoners of all peoples, international Jewry.”

Scholar Steven I. Katz put it succinctly: “The Holocaust is phenomenologically unique by virtue of the fact that never before has a state set out, as a matter of intentional principle and actualized policy, to annihilate physically every man, woman, and child belonging to a specific group.”

Or, as the philosopher Emil Fackenheim wrote, “The extermination of the Jews had no political or economic justification. It was not a means to any end; it was an end in itself.”

And there’s something more, too, a context that makes the Nazis’ Jew-hatred singularly significant. Here, perhaps, a non-historian may have said it best, and only last week.

Awarding a posthumous honor to Master Sgt. Roddie Edmonds, an American serviceman who protected Jewish captives in a German POW camp, the aforementioned POTUS recalled Mr. Edmonds’ words to the camp’s commander, who had ordered Jewish prisoners to come forward: “We are all Jews.”

“We are all Jews,” explained Mr. Obama, “because anti-Semitism is a distillation, an expression of an evil that runs through so much of human history, and if we do not answer that, we do not answer any other form of evil.”