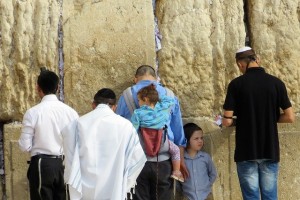 Whereas heterodox and a few left-edge Orthodox leaders have hailed the Israeli government’s decision to create an expanded official area for non-Orthodox prayer along the Western Wall (a decision by and large opposed by most Orthodox Jews), Women of the Wall (WoW) and feminist allies who identify as Orthodox are assailing the decision for reason that it does not provide for WoW-type women’s prayer groups at the Orthodox women’s prayer section of the Wall; such prayer would need to be conducted at the non-Orthodox Robinson’s Arch prayer area, along with the heterodox groups.

WoW representatives and their allies, laying out the context of various lawsuits filed by WoW against Rabbi Shmuel Rabinowitz (rav of the Kosel) and the Israeli government, have created straw man arguments to artificially bolster their position, claiming that the Western Wall has been unfairly designated as a site of Chareidi-only prayer, to the prejudice of other forms of Orthodoxy, such as WoW:

To our Orthodox sisters, who participate in our pluralist, inclusive services, whom our tefilla policy accommodates with respect, we say this: no deal which says, either adopt haredi prayer practice in order to stay at the Kotel, or go to Robinson’s, a site of prayer practices contrary to your religious commitments, and a place with no resonance or meaning for any of us, is one we will accept. We are about Jewish women’s prayer, at the Kotel. Neither aspect is negotiable. Nor is our solidarity as Jewish women. Our prayer is no afterthought to other goals, other players. No back of the bus for us, with or without padded seats, or signs.

I do not want to abandon that tradition to Haredi fundamentalists—at least, not at this unique holy and national site.

These statements are false and intentionally misleading. It is patently clear that the Western Wall’s Orthodox prayer area is home to all types of tefilla that are within Halacha and Mesorah (Tradition); one need not look past his eyebrows to see the countless minyanim there which are led and populated by men wearing kippot serugot (knit yarmulkes – as well as leather yarmulkes, baseball caps and all else), identifying as “non-Chareidim”. And so too for the women – one will find loads of women in the Orthodox women’s section from all stripes and walks of life. The Orthodox tefilla area of the Wall is glaringly not a “Chareidi-only” site. Indeed, the common thread that runs through the souls and minds of all of who worship there is not the type of headgear they sport, the color of their clothing, their background, their specific hashkafic (ideological) bent, or their accent, but rather their deference to Halacha and Mesorah while at the holiest site of prayer.

Clearly, the argument of WoW and its allies that the main Kosel prayer area has been unfairly designated as an exclusive locus for Chareidi fundamentalists is false, intentionally misleading, and was designed to advance a self-serving agenda.

But alas the truth has emerged, for it is not only the opinion of the greatest halachic authorities across the spectrum, including the roshei yeshiva of Yeshiva University and the senior cadre of Israeli Religious Zionist sages, who do not accept WoW “minyanim” and similar groupings as Orthodox; for it is crystal clear as well even to the secular Israeli government and the non-Orthodox movements that negotiated the new Western Wall deal that WoW-type prayer groups do not fall within the Orthodox classification. To behold women laying tefillin, in violation of the Rema in the Shulchan Aruch (OC 38:3), and women filling male roles at public services, in contravention of thousands of years of Tradition and the rulings of the most preeminent halachic masters across the board, is readily recognized as non-Orthodox practice by even secular authorities, who have relegated WoW-type prayer gatherings to the Wall’s non-Orthodox worship area. Just as I cannot claim to be a blonde with black hair, or a bearded man with a clean-shaven face, has the new Western Wall decision settled on a very public level WoW’s claims to Orthodox bona fides.

As sincere as this sentiment may be, it is one of inherent contradiction, as those who “live their lives according to halakha” are expected and bidden to submit to the rulings of Halacha’s greatest decisors. Otherwise stated, in the lexicon of Rav Yosef Dov Soloveitchik zt”l, Halacha is about surrender to the Divine Imperative – not about designing Judaism as I want it to be.

While the new Western Wall decision may offend Tradition inasmuch as it legitimizes the violation of Tradition at our most sacred locus of prayer, it has also served to separate the men from the boys, or, more precisely, the Orthodox from the non-Orthodox, with glaring and prominent clarity.