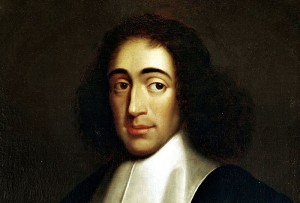 This article originally appeared in Times of Israel:

He rejected the concept of divine revelation; he equated God with nature; he denied the idea of a personal God, Who intervenes in history and performs miracles; he renounced external interpretations of Scripture, such as the Oral Law, the Talmud; he believed that Jesus was greater than Moses; he denied the existence of prophecy; he dismissed the concept of the Jews as chosen by God. He fit to a T the various categories of heretics as codified by Maimonides (Hil. Teshuva 3:6-8).

Yet Shmuly Yanklowitz, in An Open Letter to Spinoza, apologizes to Baruch Spinoza, the famed heretic who propounded the above ideas and was hence excommunicated by the Jewish community of Amsterdam in 1656. In what can be called nothing short of the absurd, Shmuly honors and blesses Spinoza, condemns his excommunication and apologizes for it, and affirms, in Shmuly’s eyes, Judaism’s welcoming of ideas that are deemed by the Torah to be apostasy:

Those who don’t understand the subtle complexities of your ideas ban them simply for being foreign and threatening. But these individuals are spiritually xenophobic. Your philosophy must, at the least, be understood. For doesn’t Judaism thrive most amidst an open marketplace of ideas where critiques, protests, and counterpoints are not only to be welcomed but encouraged? Is not this the source of our intellectual sustenance? The ban on you has, for centuries, represented fear. And Judaism must embrace a bold and fearless journey forward.

Judaism shuns clinging to dogmas and the notions of religious exclusivity. Our normative practices reflect the intellectual ideals we hold dear. We must make clear, then, that the precepts of Torah embrace autonomy, open-thinking, hermeneutical diversity, and engaging with ideas that may be outside the comfortable framework that is all too prevalent in contemporary Jewish thought. Thus, defending you is defending the essence of Judaism itself.

May your neshama have an aliyah…

Judaism does encourage inquiry and new ideas, but only once the dogmas — yes, dogmas — such as those formulated by Maimonides and other classical authorities, which affirm an omniscient and omnipotent God, prophecy, divine providence, divine revelation, the truth of the Torah — both Written and Oral — and so forth, are first accepted, along with the traditions of the Sages. One may not even entertain ideas that give rise to rejection of the above fundamentals of belief (Maimonides Hil. Av. Kochavim 2:3).

This is traditional/Orthodox Judaism. As such, the ideology of Spinoza needed to be forcefully renounced, and an iron-strong message of condemnation was most certainly required. Spinoza’s excommunication has been basically accepted as proper by centuries of rabbinic leadership, and its correctness has even been affirmed by several modern religious academics.

Let’s shift gears a bit — but not too much:

It just dawned on me that I am waking up from being under a 20-year spell of the patriarchal god. I don’t know that I want to be in constant negotiation with male-centered texts… She (my daughter) explained that she did not accept the curse that Eve got from God — both about grief in childbirth and about women being ruled by men. (With this in mind she chanted these verses in the specific mourning trope of Lamentations!)

These are the words of Dr. Melanie Landau, a recently-ordained star graduate of Yeshivat Maharat, the Open Orthodox rabbinical school for women, endorsing new bat mitzvah rituals and attitudes. These words are about as unaccepting of Torah values and tradition as it gets. Yet they are feted on the Yeshivat Maharat Facebook page. Similarly, Shmuly, who has repeatedly made public statements that are not in consonance with Orthodox Judaism, is nonetheless honored by Open Orthodox leadership and his fellow graduates of Yeshivat Chovevei Torah, who serve as frequent guest speakers at Shmuly’s Valley Beit Midrash and who participate in other programs under his coordination.

Although the words of Shmuly and Melanie could be dismissed as the well-meaning, yet naive and wayward expressions of less learned, wet-behind-the-ears young clergy (and I do believe that these two people, along with their colleagues, are indeed very sincere and well-meaning), their endorsement by the Open Orthodox establishment speaks volumes. It speaks of a movement that claims the Orthodox brand yet is anything but, as embrace of heresy and adoption of attitudes that reject Torah values and beliefs are a dominant part of the package. Just as it is silly and farcical to call North Korea a democracy, despite its assertion that it is the Democratic People’s Republic of North Korea, expropriating descriptive terms whose meaning it glaringly defies, so too has Open Orthodoxy comically co-opted the Orthodox designation, despite its rejection of Torah tradition and core values in so many fundamental ways.

It is hard not to relate this train of thought to the annual Martin Luther King Jr. Day concert in the epicenter of Open Orthodoxy, where a Baptist choir sings church music in this congregation’s sanctuary, before its holy ark. To describe this as a form of Orthodoxy is an exercise in absurdity and irony of the highest order. Such can also be said of the recent Open Orthodox rabbinical affirmation of Christianity (“Orthodox Rabbis Bring Jesus Home for Christmas“).

I am tired of writing about a movement that turns the word “Orthodoxy” into a farcical, silly and empty term, pliable without limit and able to be turned on its head. We have already read about Open Orthodoxy’s celebration of gay marriage, its ordaining of women, its engaging in banned interfaith discourse, its changes to conversion procedure, its feminization of prayer services, its defense of heresy and its rejection of core Torah values. How much further will the Open Orthodox movement go until it itself realizes that it cannot honestly claim any bedrock connection with Orthodoxy?