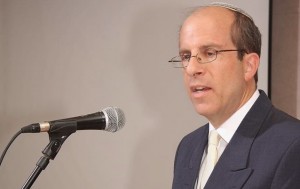 I have to give credit to reporter David Ze’ev and Kol Yisrael, The Israel Broadcasting Authority’s national station, for investigating both sides of the Open Orthodox story. The JTA (like most of the Jewish media outside the Orthodox world) seems prepared to declare Open Orthodoxy “Orthodox” without question. David Ze’ev is of a different sort, and this is what resulted (content owned by the IBA):

David Ze’ev: Rabbi Yaakov Menken is very involved with Cross-Currents.com, which has what some refer to as a go-to source for the perspective of traditional Jews; Rabbi Menken speaks out against Open Orthodoxy.

Yaakov Menken: Well, it’s very interesting, you know people are talking about it with regards to women rabbis, etc., and that’s almost a red herring, because it’s something where… the key here is that Open Orthodoxy is describing itself as an Orthodox movement, using that moniker of being Orthodox, but according to all of the Rabbinic organizations in the world, nobody is certifying them as Orthodox except they themselves.

DZ: I mean what do you need, what is it called to be certified as Orthodox?

YM: Well, certifying is perhaps a loose term. We should understand that Orthodoxy is basically a synonym for traditional, observant Judaism. It’s not a moniker that the Orthodox made up for themselves. On the contrary, as Rabbi Sampson Raphael Hirsch pointed out in the 1860s, this was the name that the Reform gave to the old, backwards, traditional Jews. And so Orthodox was supposed to mean old and stale, and what it really means is traditionally observant.

DZ: So, to the substance, do you Rabbi Menken disapprove of women having a greater role? Most of these people from this, for example Yeshivat Maharat, are not calling themselves rabbis, they get ordained, they have more of an education; are you against more inclusion of more segments of the population? That’s what the people in Open Orthodoxy say that they are.

YM: Again, with regards to Open Orthodoxy all of that is simply a sideshow. It’s not really the core issue. There are definitely different schools of thought with regards with what women should or should not be involved with, and current circumstances, and this and that, all of which are certainly able to be discussed within a context of observance. But what’s being discussed here, really, is not a particular Halachic observance. It’s a philosophy that says oh, we’re going to claim to be Orthodox while believing, for example, challenging the historicity of the Torah itself, saying that Abraham made a horrible mistake and was prepared to murder his son rather than follow the Divine Commandment, when we know in the text itself it says that G-d rewarded him for doing so. It’s saying that Moses taught G-d a thing or two about who G-d needed to be. I mean, these are things that are totally foreign to what it means to be observant, to follow G-d’s law, and they’re claiming to be an Orthodox group while they do it.

DZ: Rabbi Yaakov Menken, who is also founder and director of Project Genesis, and creator of its website Torah.org. More of that on Sunday’s 12:30 p.m. newscast.

You can hear that second interview here: