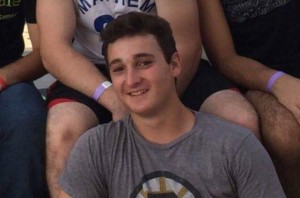 On Thanksgiving Day, when more Turkey is consumed and football is watched in this country than any other day of the year, I chose to forego a local family celebration and instead to join another part of my family that has been understandably going through a horrid time. I drove up to Sharon, Massachusetts, to visit with the Schwartz family and participate in the Shiva for Ezra, to join in the mourning for this precious Jewish soul that was torn away from us. Although the Schwartz home was a bit less crowded that day, it still teemed with the bustle of people young and old, those who knew the Schwartz family beforehand and those that did not. After my visit, I was speaking to a friend from Sharon, Massachusetts who sincerely posed the question: Mah Nishtana HaTerror Hazeh – Why has the Shiva of Ezra Schwartz merited the attention it has received?

The question is worth exploring. Unfortunately we are not strangers to terror and tragedy. Baruch Hashem a hallmark of Jewish communities around the world is that we are there for each other in good and sad times. Yet I cannot remember a time ever that there was an outcry and a rush of active participation in the sorrow like we have seen by Ezra Schwartz HY”D. First was the gathering at Ben Gurion Airport with hundreds participating in the sadness and soulful singing and words of inspiration (which has been watched 20K on times on You Tube), and then the funeral and Shiva that merited thousands and thousands of visitors. Dignitaries, religious leaders, sports heroes and scores of schools, shuls, rabbis, presidents and Jews from around the country who never met Ezra felt the need to come and share in the sorrow and provide some comfort with their presence. Why?

I believe there are at least two answers to the question:

We are living in very troubled times. The words of the Haggadah — In every generation they rise up to dispose of us — ring too true in the media and on the web daily. What gives us strength is our trust in G-d, our illustrious history and our sense of commitment to one another as a nation. The almighty G-d is a constant. Our national history is well known and documented. It is our sense of unity and community that needs strengthening. Ezra Schwartz HY”D inspired our nation to grow closer in a way that we never have before. That is what made this Terror different; and for that alone, he will always be remembered.