The Price and Success of Contemporary Orthodoxy: Sociology or Theology? 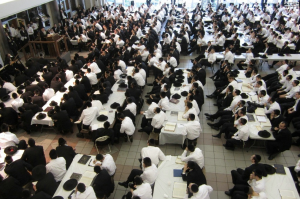 In analytical Torah study, we learn to distinguish between a siman and a sibah – to differentiate between that which is a symptom and that which is a core factor which gives rise to the symptom. A student in a Gemara shiur who offers up what seems like a superficial distinction between two halachic applications may rightfully be challenged back by the rebbe: “It is a chiluk, but is it mechalek?” (“It is a distinction, but does it reflect any axiomatic difference?”)

In Lessons Learned From Orthodoxy’s Dramatic Growth, Dr. Steven M. Cohen provides jaw-dropping data about the exponential growth and ascendancy of Orthodoxy in America over the past two decades:

… Since 1990, the number of Orthodox Jewish congregants in the U.S. has at least doubled, the Jewish engagement indicators have moved higher, and their average age has declined… the numerical details are stunning: The sheer number of American Jewish adult congregants who identify as Orthodox (be it haredi, Modern Orthodox, or other) leapt from 220,000 to 448,000.

The surge in Orthodox adults is surpassed by the even steeper growth in the number of their children. While Orthodox children up to age 17 amounted to 85,000 in 1990, the comparable population more than quadrupled, reaching about 350,000 in 2013.

Orthodox households contained 61 percent of all Jewish children in the area. For the five boroughs alone, 74 percent of Jewish children were Orthodox. In both the national and New York surveys, the haredi growth certainly led the way, but the Modern Orthodox also grew in number.

Consistent with the high birthrates and population explosion among the Orthodox, since 1990 the average age of adult congregants in Orthodox shuls in America declined from 51 to 44. The trend sharply contrasts with the aging of congregants in the other movements. In 1990, among the three major movements, the average age of adult congregants was almost the same. By 2013, about ten years of age separated the more youthful Orthodox from the older and aging Conservative and Reform congregants.

Dr. Cohen concludes this exceptional article with some analysis:

The “secret” of Orthodox retention and expansion can be summarized by a five-letter acronym: PRICE.

That is, they exhibit extraordinary Passion about Jewish norms and purpose. They perform numerous religious Rituals. They maintain high rates of Informal association (more spouses, friends, and neighbors who are Jewish). They engaged in Community — be it in synagogues, organizations, charities, or political-like activity. And they undertake Educational activities, be it learning groups for themselves or sending their children to day school, overnight camps or to Israel for a very influential gap year.

Similarly, non-Orthodox Jews who follow the same path exhibit extraordinary success in raising their children as committed and active Jews.

The Orthodox have shown that the price of intensive Jewish living has its rewards. The question is how many others will be willing to pay the PRICE to assure a rich Jewish life for themselves, their children, and their grandchildren.

Yes, “PRICE” has assuredly contributed to the smashing success of contemporary Orthodoxy in terms of growth and engagement, but PRICE itself is a siman, not a sibah. It is a chiluk, but it is not itself mechalek. What is the underlying, core factor that animates Orthodox Jews to “pay the PRICE”?

Although Dr. Cohen writes that “non-Orthodox Jews who follow the same path exhibit extraordinary success in raising their children as committed and active Jews”, the qualitative returns of such cases are far, far lower. It is true that Jewish retention and engagement rates of non-Orthodox families whose children attend Jewish day schools and who surround themselves with Jewish friends and rituals are incomparably superior to those of non-Orthodox families who do not follow this path – yet the overall levels of general and enduring commitment on the part of the heavily involved non-Orthodox are notably lower than those of this group’s Orthodox peers. While there is scant formalized data about this topic (as the statistics predominantly lump together all Jews of each non-Orthodox denomination, failing to rigorously examine non-Orthodox Jews in terms of individual or specialized group pursuit of PRICE-type endeavors), there is an overwhelming amount of anecdotal evidence of significant retention and engagement casualties even among non-Orthodox Jews who fully pursue PRICE-type endeavors.

Aside from the acute shrinkage of the Solomon Schechter day school system, there is a dearth of multi-generational sturdily observant/engaged Conservative Jewish families. Among such Conservative Jews, robust observance and Jewish engagement generally wane after a generation or two at most, with the notable exception of those members of highly-traditional Conservative congregations who become Orthodox. (Please also see this important article.) And we all know about and behold pervasive intermarriage even among the children and grandchildren of very traditional Conservative Jews, inasmuch as this intermarriage rate pales in comparison with the overall picture among non-Orthodox Jewry.

So, what is the sibah behind the Orthodox pursuit of PRICE? What is the factor that is truly mechalek and has wrought astounding success?

When one observes Mitzvos due to a belief that the Master of the Universe requires such, and one learns Torah with the belief that it is the holy and literal Word of God, there is no real room for apathy, decline or degeneration. Of course, there are always major and powerful influences that tug a person in the other direction, and gross deficiencies in Jewish education, coupled with the forces of parnassah (making a living) and social acceptance, have taken incredibly massive tolls in terms of unprecedented assimilation, particularly in the first half of the 20th century.

However, it is not commitment to Jewish identity, Jewish culture, or even Jewish preservation that drives people to invest well beyond their means and then some, and to strain themselves beyond imagination, for the sake of Torah education and the fulfillment of Mitzvos. It is rather an awareness of a holy obligation, as expressed in God’s Mandate, that propels Orthodox Jews to sacrifice everything for Torah and Mitzvos without second thought.

The Holy One, Blessed be He, has promised that Torah and the Jewish People will always endure. It is this promise that has sustained us against all natural odds through millennia of persecution, exile, slaughter, forced isolation and constant discrimination on all levels. Just as the Torah Jew knows that commitment to Torah is not subject to debate, and that it must be manifest without compromise no matter what, God has blessed us with supernatural endurance and resurgence, defying “normalcy” in every way.

We pay the PRICE, often with indescribable sacrifice, but what ultimately matters is the special and holy motivation that animates the investment. And we continue to be wondrously inspired by the return on this all-encompassing life-investment, as provided by the Ultimate Guarantor and Perpetuator of our endurance and future as a Torah nation.