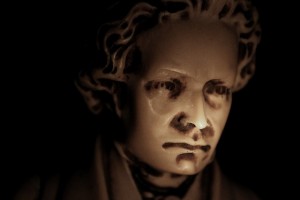 One of our readers with an impish sense of humor sent me a link to a recent performance by the Jewish People’s Philharmonic Chorus of Schiller’s Ode to Joy in Yiddish. [WARNING: It is by a mixed choir. No solos. Consult your LOR for kol ishah guidance. You can mute it, and still follow both the Yiddish and the translation.]

Except that it wasn’t. Rather, it was a performance of I L Peretz’s Yiddish version of the Schiller work that was immortalized in the last movement of Beethoven’s Ninth. The differences between them are telling.

Schiller’s poem was a paean to the power of joy, through whose power alle menschen werden brüder/ all people become brothers. In other words, the differences between people can be set aside at special moments of common celebration and ecstasy. Reasonable enough. (We would not expect less from a figure about whom Rav Samson Raphael Hirsch thought so highly that he invited the general public to the Schiller centenary he organized for his school. See Collected Writings of Rabbi Samson Raphael Hirsch, vol. 9, pgs. 137-152.)

Peretz, however, doesn’t speak of people becoming brothers, but the fact that they already are. All people are the same. The shades of difference are simply tints, nothing more. The equality of Man is not a goal to be achieved, but an accepted fact.

It is a noble sentiment, but perhaps a bit ahead of its time. (Peretz died in 1915.) Peretz was seen by some as part of the great triumvirate of Yiddish literature, along with Sholom Aleichem and Mendele Mocher Seforim. It is not surprising that Peretz, along with many who found the world of traditional observance restrictive and out of touch with the times, might convince himself that he was living on the cusp of a breakthrough in human history in which all differences between nationalities, classes, and ethnicities would melt away, leaving a grand Brotherhood of Mankind. He might have believed that some of the revolutionary fervor percolating at the time had already made more progress towards a messianic existence than was supported by reality.

While Peretz reportedly was given to fits of optimism, the poem does not match his belief system at other times. He was actually a champion of preserving the differences (at least of cultural expression) of different groups. Without knowing very much about them, he was also an admirer of chassidim, refusing to negatively stereotype them the way some other Yiddishists did.

This ode to the commonality of Man seems curious to us looking back at the century it helped to inaugurate – one that saw mass destruction and barbarity brought to levels not conceived of before, and that left much of the world pessimistic and skeptical. It brings to mind Rav Kook’s warning (see, e.g., #89 of the Igerot) that the adoption of high-minded principles when populations are not ready for them will produce calamity.

The difference between Schiller and Peretz was perhaps best captured by Abraham Joshua Heschel. Korach claimed that כל העדה כלם קדושים, that the entire assembly, each and every one, were in fact holy. By contrast, wrote Heschel, the Torah stresses והייתם קדושים / You should become holy. Kedushah is a process, not a statement of fact. It must be achieved, earned.

Peretz’s dream resonates with Ben Azai’s זה ספר תולדות אדם זה כלל גדול מזה . To achieve it though, as a working reality will take much more concentration on what Peretz mentions from the beginning – the fact of our creation by the One G-d. So we will continue to daven for that better day that the navi spoke of, and that we mention at the end of Aleinu three times a day – even if they cannot be set to the last movement of Beethoven’s Ninth.