Intermarriage: Just Say “No”, and Mean It! 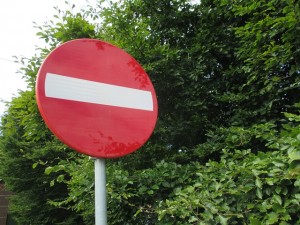 Intermarriage is probably the reddest line that exists for Orthodox Jews. There are Jews who identify as Orthodox yet are not fully careful about kashrus, about certain aspects of Shabbos observance, and so forth – but to marry out is a non-starter. It is not on the radar, it is not done, and it is unthinkable.

The few Orthodox-affiliated Jews who do marry out are assured to be a few and not more, due to the utter ban and uncompromising rejection of intermarriage by the totality of the Orthodox community. This zero tolerance stance, which has become part of Jewish tradition and is not a new, reactionary position (not that new, reactionary positions are always bad – they are sometimes needed), has worked, except in times of mass public sh’mad (assimilation), when even the highest of barbed wire fences will not help. But under normal circumstances, the system is accepted without question and seems to be doing the job fairly well.

It is therefore with shock that I read Orthodox Rabbis Confront Intermarriage, by Rabbi Kerry M. Olitzky of Big Tent Judaism and Rabbi Asher Lopatin of Yeshivat Chovevei Torah.

For those who don’t know about Big Tent Judaism, one look at its website says it all. Featuring celebratory photos of intermarried families, we read things such as:

The Jewish people have been a global people, a “mixed multitude,” for thousands of years. Today we’re more diverse than ever, and that’s something to celebrate. Our families are all colors and include members from all other religious and cultural backgrounds. Together we strive to add meaning to our lives and to better the world, informed by our rich heritage.

The Torah and the rest of the Jewish sacred literature contain both admonitions against intermarriage and positive examples of intermarriage. In Deuteronomy7: 1-3, the Torah says, “You shall not intermarry with them: do not give your daughters to their sons or take their daughters for your sons. For you will turn you children away from Me to worship other gods….” This reference against intermarriage is based on the notion that intermarriage will lead the individual to another religion.

Despite this, the Torah also portrays positive examples of intermarriage. Moses married Tziporra, who was the daughter of a Midianite priest. Ruth, the great-grandmother of King David, was a convert. Queen Esther, who saved the Jews from Haman in the Purim story, was married to the Persian, non-Jewish King Ahashverus.

The prohibition against intermarriage sought to preserve Judaism by maintaining exclusivity. The laws of kashrut (keeping kosher) try to accomplish this indirectly. If you have a special diet, you are less likely to eat with non-kosher, non-Jews, and therefore, you have less opportunity to socialize, and consequently, marry them.

That being said, it is evident that intermarriage is not only a modern phenomenon; it occurred in the Bible as well. Intermarriage is inevitable, especially in a society where Jews and non-Jews work together and socialize with one another with few barriers. Prohibiting it has not stopped the trend. Realizing the realities of Jewish society, the Jewish Outreach Institute works with the intermarried, promoting an inclusive Jewish community.

Big Tent Judaism refers people contemplating intermarriage to rabbis who will officiate at their intermarriages, and its message is one of total inclusion.

Of course, Big Tent Judaism is not purposefully promoting intermarriage, and its goal is, rather, the perpetuation of Judaism:

Nonetheless, when the message sent is one of acceptance of intermarriage, it is clear that danger is lurking.

It was thus quite disturbing to read Rabbi Olitzky and Rabbi Lopatin jointly write:

Some people might think that facing the challenging reality of intermarriage and being fully committed to Orthodox Judaism is an oxymoron. Yet, two weeks ago, 20 Orthodox rabbis accepted an invitation by Big Tent Judaism and the Lindenbaum Center for Halachic Studies at Yeshivat Chovevei Torah to join together for a behind-closed-doors, daylong symposium focused on the nexus of the two issues.

We promised no media coverage out of respect for the rabbis’ willingness to participate. Sponsored by the Marion and Norman Tanzman Charitable Foundation, this was a historic meeting for Orthodox rabbis — the first of its kind — since the focus was not on so-called prevention. Rather, it was about understanding intermarried couples and their families. The conversation was frank. There were no pulled punches. Yet the pervasive question taken up by these rabbis was: How do I connect with people whose life choice I disagree with — and keep them engaged in the Jewish community?

While it is common wisdom that intermarriage does not impact the Orthodox community, these rabbinic leaders know that this is not the case, even if the incidence of intermarriage in the Orthodox community is far lower than among other population segments in the community. Thus, all those in attendance took a bold step forward into American Jewish life by attending the symposium and digging deeply into the issues, knowing full well that they could help shape the future landscape of American Jewish life by how they respond to intermarriage in their communities and beyond.

…The rabbis also struggled with issues of patrilineal descent and the idea that the children of intermarriage (when the father is Jewish and the other partner is not) could be considered Jewish, even if not Jewish according to halacha. This topic also emerged while debating the validity of conversions by non-Orthodox rabbis.

…This symposium showed that Orthodoxy could maintain its fidelity to halacha and tradition while being sensitive to the complexities and realities of the diverse Jewish community. In fact, the Orthodox community might be critical in enabling intermarriage to not be “the end of the line,” but, rather, a challenge leading to a deeper relationship to Judaism and the Jewish community.

A few weeks ago, YCT graduate Rabbi Shmuly Yanklowitz posted in favor of embracing intermarrieds. I just hope that this changed stance toward that which tradition has heretofore unequivocally shunned and excluded without exception will not be yet another major trend and fault line that divides Open Orthodoxy from the rest of the community.

Imagine sending a message that Orthodox Judaism does not allow intermarriage, yet if one intermarries, he is still welcome and can still even be “frum”. Imagine setting precedent for people to be intermarried yet “Orthodox”, effectively dropping the ago-old zero tolerance policy. Open Orthodoxy must urgently consider the very real dangers at hand.