Vayechi – In Praise of Diaspora 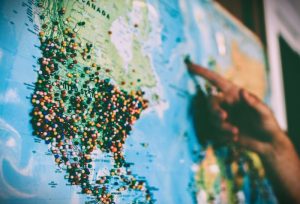 Eretz Yisrael is the desideratum to which the Torah’s entire narrative leads.

From Hashem’s promising the Land to Avraham’s descendants, to our ancestors’ exodus from Mitzrayim and years of wandering in the desert, the path of the Torah’s account leads inexorably to the Land.

Even the Torah’s description of the universe’s creation, as Rashi expounds in his very first comment in parshas Beraishis, is intended to establish that Eretz Yisrael is ours.

Rav Tzadok HaKohen of Lublin (Pri Tzaddik, Vayechi) notes that the first word in our parsha indicates that Yaakov’s true “living” took place during his final 17 years in Mitzrayim, after all the challenges he had lived through. Now he was free to attain his spiritual goals. In Egypt.

Har Sinai, too, is not in Eretz Yisrael.

“In every generation,” writes Rav Tzadok, “souls decline.” Yet “we see what happened to the Jewish people especially when they were in exile… In exile they arrived to the exalted levels of holiness, because this is the will of Hashem.”

And he cites Rav Simcha Bunim of P’shischa as having said that “even though the souls of each generation progressively decline, the essence of the heart (hanekudah shebilev) becomes progressively purified and rarified (nitaheres umizdacheches yoser) in each successive generation.”

I don’t claim to know what those phrases truly mean. But that they mean something can’t be denied.

Why Jews living and developing in places other than their ancestral home is a vital part of Hashem’s plan is not something we can fathom. That fact, Rav Tzadok explains, is symbolized by the parsha’s being sasum, “closed off,” with no space before it. Spaces in the Torah indicate opportunity to absorb and understand. There can be no understanding of the need for galus.

But the need for Torah to develop outside of the Jewish homeland is clearly established, even if inscrutable. Galus and giluy (revelation), after all, share the same root letters.

My most recent Ami Magazine column, “Mike’s Maligned Menorah,” can be read here.

And a new website worth checking out is here.