Shofar in Auschwitz – Did Take Place! 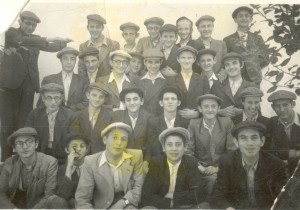 If you have a chance to buy this week’s Rosh Hashanah issue of AMI Magazine, you will find my summary of research that was set in motion eight years ago due to some caustic talkbacks to my posting on cross-currents of “Sounding the Shofar in Auschwitz.”

In Ellul 2007 I posted the translation that Jessica Setbon and I had just completed of the memoir by Rav Zvi Hirsch Meisels ztz”l.
We were taken aback by some of the skeptics who questioned whether this was a situation of “spiritual or physical hunger” – At the time, Rabbi Adlerstein and others addressed the concerns of responders.

The memoir was subsequently published in the anthology by historian Esther Farbstein, The Forgotten Memoirs (Artscroll).

Rav Meisels, was a Dayan in Waitzen, Hungary. Some of the boys in his yeshiva are pictured in the above photo taken BEFORE the Nazi occupation of Hungary. In the spring of 1944 Rav Meisels and the boys were taken to Auschwitz. In his memoir, Rav Meisels described a situation where hundreds of boys slated for the gas chambers beseeched him on Rosh Hashanah 1944 to blow shofar and clamored for him to give them a morsel for the mitzvah of a Yom Tov seudah.

One of the talkbackers was skeptical:

But why do you, Esther Farbstein or even (if I may say so) Rabbi Meisels himself assume that the weeping, shouts and begging of the young prisoners on the block awaiting their imminent execution had anything to do at all with his shofar blowing or with Rosh Hashanah in general? Don’t you think that their heartbreaking crying and yelling was the natural result of their horrible fear of their imminent demise rather than from the sound of the shofar? …. Isn’t Rabbi Meisels (together with Esther Farbstein) a bit too presumptuous here?
Likewise with the bread for these poor youngsters destined to death: why assume that they begged so bitterly for a piece of bread for the purpose of the “mitzvah of the holiday meal” when it is so clear that they were simply dying of starvation? … In short – why assume that the whole terrible scene described so touchingly by Rabbi Meisels had anything to do with Rosh Hashanah or with any Jewish value?…

In addition to cynical responses such as the afotementioned talkback, implying that Rav Meisels’ account was a myth, there were genuine questions: Where did Rav Meisels get a shofar? Where were the guards? Who were these boys? Rabbanit Farbstein, took up the gauntlet and set out like a detective-cum-historian to find some answers and searched for clues. Almost not written documents could be found. She had to rely on witnesses and testimony.
I myself was privileged to interview two witnesses. I described one of them, Yeshaya Glick, two years later, on cross-currents.

Esther Farbstein searched the world for survivors of that event and, with the help of Ganzach Kiddush Hashem, tracked down over 20 survivors, men now in their 70s and 80s who had been among the approximately 3000 Hungarian boys held in separate barracks in Auschwitz.
Their testimony was published a few months ago in Esther Farbstein’s newest book, a 900 page history “Hidden in the Heights: Orthodox Jewry in Hungary during the Holocaust, (transl.Deborah Stern, Mossad Harav Kook).

The results of her research span 70 pages which I summarized in my AMI feature. I will cite here a few examples of the testimony.
On the eve of Rosh Hashanah 1944 the boys, numbering several thousand aged 13-19, underwent a selection by height. Yosef Kleinman gave a first-hand account at the Eichmann trial and Rav Meisels also recounts it.
Yeshaya Glick described the shofar blowing thus:

“At two o’clock, two hard taps were heard on the door, followed by a brief announcement: ‘Anyone who wants to hear the shofar should come out behind the barrack.’ The eminent Dayan Zvi Hirsch Meisels was there with his son. They had come to blow shofar for us boys. They had deliberately chosen the place behind the barrack that I lived in, due to its proximity to barracks 30-32 which served as the hospital, so they could hear too. Those in Camp F, the twins’ camp, were also able to hear… Our lives were in danger. I recall his appearance on this moving occasion, when he stood without a beard and peyos, but was all fervor and devotion, intending to blow shofar with enthusiasm and Chassidic ardor. Then he started blowing all the tekiyas, just as it was done in shul, without skipping any, blowing all the blasts precisely and well, and if a sound didn’t seem right to him, he repeated it, without speed or haste.”

Sinai Adler of Prague described what he was thinking during the blowing:

“We were in a genuine hell on earth. The chimneys rose up in the background, and here, too, flames of fire and smoke ascended heavenward. ..and within that huge conflagration, the sound of the shofar was suddenly heard. Our Father in Heaven, look and see the sacrifices taking place here and now in the hell that we’re in… Have mercy.”

Said Chaim Farkas in an interview,

“We forgot where we were. We said, ‘If we’ve managed to blow the shofar, we’ll also hear the sound of the shofar of the Mashiach.'”
Menachem Brickman, a boy from Lodz taken to Auschwitz when the ghetto was liquidated, described the experience: “Suddenly, a sound—a sharp, ongoing sound that hits me. All at once I become tense and listen to the sound, which casts me back to my father’s house. But the sound is already gone… For a moment I think it was an illusion. A shofar? A shofar being blown in Auschwitz? But the thought races through my head. If there’s a shofar, maybe there is still hope. I turn to one of the men and ask him in Yiddish, ‘Vas iz dos?’ ‘A shofar,’ he tells me. ‘It’s Rosh Hashanah today.’ Rosh Hashanah, I think to myself. A shofar being blown on Rosh Hashanah. Right under the Nazis’ noses. Something about the blowing instills in me renewed hope. The sound of eternity has burst forth even in Auschwitz. I keep wondering who blew the shofar and how he managed to smuggle a shofar into Auschwitz. It seems like a tremendous miracle to me. A small light in the dark of night.”

In the course of her research, some of the technical questions were answere. The shofar came from a transport of Jews fro Lodz who arrived summer 1944 . The Nazi guards were stationed far away , and the Jewish Kapos who were closer, were bribed to turn a blind eye.

Witnesses recall a few of Rav Meisels’ words in an accompanying sermon that impressed them. Yosef Herczl, among those condemned to death but managed to escape, remembered his speaking about the Biblical phrase ba-keseh le-yom chagenu (‘at the fixed time of our feast day’). The Talmud relates the word keseh (fixed time) to the word kisui (covering). The rabbi explained that this day is ‘covered,’ that is, too lofty to understand
Readers of Rav Meisels’ memoirs are astonished by the intensity of his relationship with the boys. This relationship, formed in extraordinary circumstances by a leader, educator, and rabbi, enabled them to retain a hold on life.
Testimonies about faith and mitzvah observance during the Shoah have been presented in the past by others not as history but as “folktales” or “Shoah myths.” However, in light of this research, set in motion by cross-currents, it has become apparent that such displays of steadfast faith and observance were true, and were common reactions that served as existential anchors in the turbulence of the Shoah.
Yasher Koach to cross-currents for their role in getting the ball rolling.