Being Confused on Tisha B’Av – It’s OK, and It’s and Even Recommended 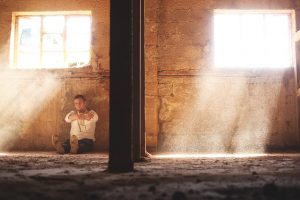 Every year, as we go through the Bein Ha-Metzarim, the period commencing with the Three Weeks and culminating with Tisha B’Av, I get very confused, and I think that many others do as well.

One the one hand, the Batei Mikdash (Temples) and the Galus (Exile) were caused by our sins. This is clear from Tanach (the Bible), the Talmud and the very texts of the Kinnos.

On the other hand, when punishment is meted out due to the commission of sin, the Jewish response is not so much to mourn and certainly not to complain, but to act – to do teshuva (repentance) and correct our ways. Such has been precedent since Biblical times, and throughout Jewish history. This being the case, why do we both mourn and complain on Tisha B’Av of the losses, the harsh wrath of God and the calamities that befell our people? If we know the reason for the punishment, let’s get over it and take action. Why wallow in sorrow?

Furthermore, and doubly perplexing, is that on Tisha B’Av, we actually question God – not heretically, but we ask questions of “why”: Why did God rage against us? Why did He not have more mercy? Rav Soloveitchik zt”l explained that this is the one time of year that we are permitted to pose such questions to God, taking the cue from Yirmiyahu (Jeremiah) himself.

It is so confusing. We know why punishment was meted out; we read about it in Tanach, in the Gemara, and sporadically throughout the liturgy of Tisha B’Av – yet we mourn, moan and conduct ourselves at times during this period as if we have no clue. Teshuva and clear resolution should be the order of the day, rather than grieving, lamenting and questioning. Why is this not the case?

I would like to suggest two concepts, both of which I believe must be part of the equation.

The Churban (Great Destruction) ushered in a state of Hester Panim, the Concealment of God’s Face, or Presence. Even though we know that God is in charge, and that all which occurs is due to His will, we cannot properly perceive it in the reality of things. We cannot connect the dots. We cannot see how reward and punishment correlate with the facts on the ground. Our minds are full of chaos. We are confused.

This confusion is the centerpiece of our mourning for the Churban. The confusion we experience and articulate is actually intentional. It is supposed to be there. It is the most important, pronounced and dramatic sign of the Churban. We are meant to be confused and to express it. The paramount significance and effect of the Churban is God’s Hester Panim, and our mourning on Tisha B’Av and during the period leading up to it is designed to reflect this and make it known.

Furthermore, the effects of the Churban persist acutely to this very day. We have not recovered. The spiritual disorder, apparent lack of justice, geographic displacement, and mysterious and vicious persecution and enmity endure, from the Churban through the present. Although we did not live at the time of the Churban, we are nonetheless its direct casualties, and its effects are part of our lives and are often in our face.

On Tisha B’Av, and during the Bein Ha-Metzarim, we vividly proclaim, experience and demonstrate that we ourselves are victims of the Churban and that the Churban’s effect is still ever present. Precisely as on Pesach, when we must personally sense and exhibit our liberation (“Chayav adam liros/ l’haros es atzmo…”), on Tisha B’Av do we likewise personally sense and exhibit our loss and our status as living casualties of the Churban, by being unsettled, confounded, discombobulated and confused. Our confusion embodies and affirms what the Churban is all about; our confusion is purposeful and intentional. It is supposed to be there, proclaiming the state of Hester Panim and the profound significance of the Churban.

A few years ago, my son, preparing for a family tree project in school, asked me for a photo of my great-great-grandfather, Leizer Klein, who was a devout Jew in the Galician city of Lvov (previously called Lemberg and now called Lviv). My great-great-grandfather represented to me the last of my ancestors who, to my knowledge, looked like the Jew of old. My great-great-grandfather and his wife were known as pious Jews, from robust Chassidic stock, and my youth was filled with stories about them and their family, related to me by my grandmother, who lived with them and had a near photographic memory. (Although my paternal ancestors, Litvaks from Telshe and Minsk, were likewise very observant, there were no photos or stories of them available.)

I told my son everything I knew about my great-great-grandparents and happily handed him photos of them, courtesy of my mother, for his school project.

Shortly thereafter, I decided to do some further informal research into my ancestry, and I located several records of the lives of my great-great-grandparents. Of all the records I encountered, there is one of which I was startlingly unaware:

Elieser Klein was born in Bubjatin, Poland in 1870 to Moshe and Malka. He was a land owner and married Sara. Prior to WWII he lived in Lwow, Poland. During the war he was in Ostrowiec Swietokrzyski, Poland.

Upon coming across this, I immediately felt a shock and broke into tears. The above Yad Vashem record, submitted by my great-aunt, was unknown to me. My great-great-grandfather, of whom I had heard so much and about whom I happily and proudly told my son all that I could, had been deported from Lvov and murdered. Yes, much of my family, going way back, was profoundly impacted by the Haskala (Enlightenment), as the winds of assimilation blew ever strong. Yet theodicy and judging were not in order here; it seemed brazen. All that was in order was mourning and confusion.

As we make our way through the Bein Ha-Metzarim and approach Tisha B’Av, let us accept and affirm our confusion and lack of clarity, for such is the proper expression and fulfillment of this difficult period. By expressing our observance of the Churban through mourning and confusion, we declare our faith that the subsequent Great Redemption will be bursting with understanding, clarity and spiritual transparency.

We conclude with the magnificently illuminating words of Rav Soloveitchik:

Yet, the great historic event of the construction of the Second Beis Ha-Mikdash could not perform one task. It could not answer the question posed by Yirmiyahu in Eicha, namely, why did the Churban occur? The perplexing problem of Tzaddik v’ra lo v’rasha v’tov lo (the righteous suffer and the wicked prosper) comes to expression repeatedly throughout Eicha. It asks why did God allow the destruction of His Holy House at the hands of areilim u-temei’im, unclean villains. Why did God remain silent at the murder of prophets and priests in the Beis Ha-Mikdash, the deaths of infants, and the dishonoring of women in Jerusalem by hordes of savages and brutes. These questions remain unresolved and unanswered even after the restoration of the Second Beis Ha-Mikdash. They remain as puzzling and enigmatic today as they were during the 70 years of the Babylonian Exile. The question of…why innocent people were killed by savage criminals has not been answered.

Of course, the Jew accepts this fate with humility. Nonetheless, the events of Churban remain as inexplicable and incomprehensible as ever.

Of course, we are obligated to thank God for His mercy, love and kindness. Yes, our gratitude to the Almighty does not, ipso facto, erase from memory events and experiences which demand explanation. We must continue to ask Eicha, where is the justice of the Churban?…

The same is true nowadays as well. The question of Eicha remains unresolved. Can the proclamation of the state of Israel, with all of its glory and all of its Kiddush Hashem (Sanctification of God’s Name), ever rationalize the cataclysmic events which befell our nation in the 1940’s under the Nazis? Does Yom Ha’atzmaut answer the question of Eicha? Only arrogant fools can believe that the State of Israel is a prize for the massacre of six million Jews. Only one who lacks sensitivity, only one who is cruel and indifferent, can ever assert such a sadistic belief. Does the joy and victory of 1967 rationalize and supersede the anguish and despair of the last few decades? Aren’t we today as speechless and perplexed as before?…

As long as Eicha remains as inexplicable as it was during the dark nights of Hester Panim, as long as historical events have not been placed within the proper perspective, as long as we grope in the darkness of the prima facie nonsensical world and absurd situations, as long as people scoff at us because of our faith in the benevolence of the Almighty, as long as the riddle of Eicha is not unraveled, Tisha B’Av cannot be abandoned! As long as one Jew asks the question of Eicha, Tisha B’Av must be observed.

Tisha B’Av will be abandoned only after the question of Eicha will be answered. What was true in the era of the Bayis Sheni (the Second Temple) is certainly true today as well. Only after the Messiah arrives, only after God will reveal Himself to mankind, only after history will be placed within the proper perspective, only when God’s truth and justice will finally be acknowledged and man will live in peace, will Tisha B’Av be celebrated as a day of redemption and will become a holiday.