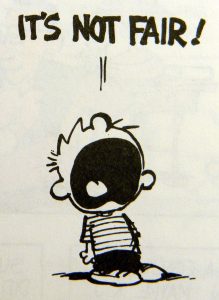 Imagine the emotions of Yosef’s brothers at the start of the parsha.

They have been grievously treated by Tzafnas Pa’ene’ach, the Egyptian king’s viceroy, who accused them falsely of being spies, then insisted that they bring their youngest brother Binyamin to him from Cna’an, even after being informed of how their father would be terribly pained to part with the boy. And when they give in and manage to convince Yaakov to let them show Binyamin to the viceroy, and bring him to Egypt, they witness their young brother being accused falsely of stealing the viceroy’s prized divination-goblet.

And when they offer to pay for the non-crime with their own imprisonment, the viceroy insists that only Binyamin be imprisoned and that they go back home, where their father is awaiting the return of all of them – especially Binyamin.

It’s been remarked that there is no word in Hebrew for “fair,” in the sense of an experience being comprehensible as just. There is mishpat, or judgment; and tzedek, which is rightness; and hogen, implying propriety. But even those words are limited to technical human interactions.

“Fair,” in the sense of life making sense, isn’t a Jewish concept. An Israeli expressing exasperation over a happening in his life that seems arbitrary or unjustifiable would thus be limited in expressing himself and say “Zeh lo fair!”

And if ever there were human beings justified in feeling that what has happened to them was unfair, they were Yosef’s brothers.

But they learned soon enough that what they saw as unfairness was simply the result of their being like the proverbial blind men palpating the elephant. They were perceiving only part of a larger picture.

A picture that, in an instant, became clear to them, with the viceroy’s two words: “I am Yosef.”

We are seldom shown, as Yosef’s brothers were, why the things that make us say “no fair!” are in fact, well, fair. But the equivalent of “I am Yosef” throughout  our lives exists, even if we cannot recognize it. And in moments of exasperation at life’s unfairness, we should remember that.

An article I wrote about Jews visiting Har HaBayis was published last week by Religion News Service and can be read here.