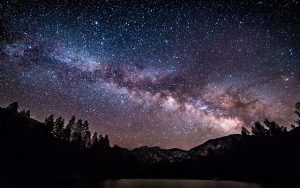 It’s rare for city dwellers to truly see the night sky. Only once, many years ago, driving on a moonless night in West Virginia, did I fully perceive the vast number of stars – nearby planets and distant suns – that were a regular part of people’s lives before the advent of electrical lights.

Although I also (to my shock and delight) saw the Milky Way, the galaxy of which our solar system is part, the billions of individual stars within it cannot be differentiated by the naked eye.

How many stars can be seen with the unaided eye? Hundreds, for certain, maybe even thousands.

Rashi makes the puzzle even more puzzling: “But were they [the Jewish people] on that day as [many as] the stars of the heavens? Were they not only six hundred thousand?”

In fact, including women and children, they were at least two million. Certainly many more than the stars that our eyes can make out on the starriest of nights.

There are midrashim and commentaries that see the Torah’s star/Jewish People comparisons as indicating something qualitative, not quantitative, like the midrash cited by Rashi on the pasuk in our parshah, which sees the reference indicating Klal Yisrael’s eternal nature. Or Rav Avraham Yitzchak Kook’s suggestion that, just as stars are used for navigation, so are the Jews to live lives to guide other nations, to be a “light unto” them. Perhaps he saw the word larov, “in abundance,” as implying larav, “as a teacher.”  But the word’s simple sense cannot be ignored.

I don’t have an answer to the puzzle, only an observation. Namely, that today we know the Milky Way isn’t a “heavenly river,” as might be the meaning of Nehar Dinur (the “river of light” referenced in Chagigah 14a), some undifferentiated band of light, but rather a collection of billions of stars. And that science, most recently the Webb space telescope, has already revealed unimaginable numbers of stars in untold numbers of galaxies far, far beyond our own.

And an essay I wrote about recent developments, especially in Canada, regarding the legal right to kill oneself is here.