A “Certain Sect of People” 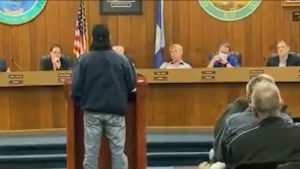 People sometimes ask me if writing a letter to the editor of a major newspaper is worth the trouble, considering that having one’s letter chosen for publication is a long shot. I reply that it’s still worthwhile, because the paper knows that, for every letter it gets that takes a particular stand, there are likely hundreds of readers who share the letter-writer’s view but didn’t bother to write.

To compare apples to, well, rotten ones, something similar is true when it comes to antisemitic screeds. Like 45-year-old Nick Colella’s during a Planning Board public hearing in the Rockland County town of Haverstraw, north of Ramapo.

The topic of the hearing was a request for a variance to convert a single-family residence into a shul. The owners want to build an addition and second floor to the home and add 27 off-street parking spaces.

At the podium, Mr. Colella took the opportunity to assert that some of his neighbors don’t put away their garbage cans for days and weeks because they “are too lazy to take it in because their maid didn’t pick it up, right?” Scattered applause ensued.

Then, eliding the fact that most of the neighborhood lacks sidewalks, he complained about a “certain sect of people” who he said “tend to walk in the street, and nobody is wearing any reflective gear.” And then explained, “So if I run one of them over, and of course I’m going back over them again, right?”

Once the video of the repulsive comment circulated, public officials were quick to condemn it. New York Governor Kathy Hochul tweeted: “Antisemitism, like all forms of hate, is horrifying and unacceptable. Everyone has the right to walk down the street without fear. New York, we are better than this.”

Ramapo Town Supervisor Michael Specht and State Sen. James Skoufis denounced the remark. And Rockland County Executive Ed Day, who has himself been accused of unfairly characterizing some of the county’s Orthodox Jewish residents and institutions, called the tirade “beyond disgusting… utterly ignorant and hateful,” condemning it “in no uncertain terms.”

Local authorities are looking into bringing charges against the shameless speaker, and New York Attorney General Letitia James offered her assistance in the matter.

All of which is reassuring and laudable. But what remains, in the end, is the likelihood that for every racist or antisemite sufficiently simpleminded to announce his hatreds publicly, there are likely many more who quietly embrace similar vile sentiments.

As Rabbi Shragi Greenbaum, the Agudah’s Rockland Office director, put it to a reporter: “What remains of concern… is how many Rockland County residents harbor similar feelings to those of the speaker at the planning board but aren’t foolish enough to proclaim them publicly.”

How many congratulatory calls, one wonders, did Mr. Colella get that night? I imagine if you asked him, he’d happily tell you.

There are people in whom antisemitism is ingrained. They are part of society and, like people who don’t shower, they just have to be tolerated (at least to an extent). And then there are non-Jews who sincerely like Jews. But the broadest penumbra of the non-Jewish population has no inherent animus or love for us, but can easily be pulled in either direction.

As Rabbi Greenbaum continued: “It’s important for neighbors — Jewish and non-Jewish — to introduce themselves to one another and to better get to know the needs and sensitivities of those outside their social circles.”

I like to call identifiably Orthodox Jews “walking Jewish billboards.” We project — intentionally or not — the image of Torah fealty to others who may well form their opinion of Jews based on how they perceive us.

And showing others that menschlichkeit is fundamental to Yiddishkeit is not hard. With the growth, baruch Hashem, of our communities and our expansion into new areas, opportunities to make good impressions are ubiquitous.

Things as simple as yielding to others in traffic or holding a door open for the person behind one can make all the difference. So can a simple smile and “good morning.”

Unfortunately, though, nothing is likely to change the Colellas of the world.