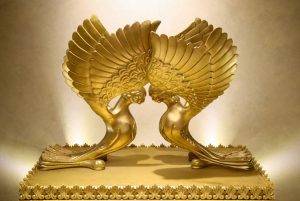 My late dear friend Yossie Huttler, a”h, with whom I often studied Daf Yomi on our Staten Island ferry commute, once asked me a question about parshas Acharei Mos.

Rashi, he pointed out, cites a Midrash on the words “that dwells among them [Klal Yisrael, even] amid their defilement.” Rashi says: “Even though they are defiled, the Shechinah remains among them” [Vayikra, 16:16].

So which, asked R’ Yossie, is it? If Klal Yisrael is deeply sinful, does the Shechina still dwell among us all the same? Or, chalilah, will we then have cut ourselves off from Hashem and deserve destruction?

What occurred to me at the time was to understand the two Midrashim as entirely in tandem. As the latter one states, our descent, if it happens, into irredeemable tum’ah is a self-cutting-off from Hashem, and leaves us deserving, chalilah, of destruction. That is a reality.

And yet, still and all, it is overridden by another reality: that, despite it all, Hashem will not ever cut Himself off from us, and will never destroy us. In fact, He remains entirely among us, even in amid our defilement.

That is because, as we say in the final brachah before Krias Shema both in Shacharis (habocher biami Yisrael biahava) and Maariv (oheiv amo Yisrael), Hashem loves us.

A child can be rebellious, even reject his parent, even deserve, as a result, a serious punishment. But a loving parent will not reject the child, or even punish him to the extent he deserves. Because the parent is loving.