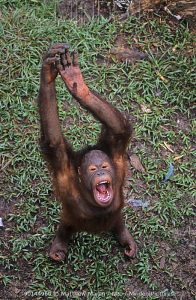 The fundamental struggle of humanity, stripped of all of history’s dross, is between two views: The recognition of a Creator (and the resultant meaningfulness of human life) and the belief that life is the product of mere chance and, hence, essentially meaningless.

It is the worldview-struggle between Klal Yisrael and Amalek, introduced at the end of this week’s parsha in a military showdown.

We read how the Amalekites attacked the Jews after our ancestors’ exodus from Egypt, and how Moshe Rabbeinu, from a distance, influenced the course of the battle.

The name Amalek, whose final letter is“kuf,” can be parsed as “amal kof” — the “toil of a monkey.” (Kuf and kof are spelled identically, and kof meaning monkey is found, in its plural form, in Melachim I, 10:22 and in Divrei Hayamim II, 9:21.)

Ki adam l’amal yulad — “For man is born to toil” (Iyov, 5:7).  We humans are here l’amal, for toil, to work to rise above our base natures and serve our Creator according to His will. Our lives have ultimate meaning.  This is the credo of Yisrael.

Amalek, by contrast, sees man as a mere product of chance happenings and random mutations, with no more inherent worth than any animal, including his closest “relative,” the ape.

Curiously, and perhaps significantly, only two creatures are able to lift their arms above their heads: apes and humans.

Might Moshe’s raised arms during the Amalek-Yisrael battle signify Yisrael’s anti-Amalek conviction, that there is a G-d in heaven?

Amalek, too, denying the divine, can raise its arms, but its gesture is meaningless. It is a monkey’s mere and quite literal aping of what Yisrael is doing when it raises  its arms heavenward.

Amalek’s “toil” is amal kof, that of a monkey, using its arms only to swing from vine to vine, without any higher aim than getting from here to there.

The pan-historical Yisrael-Amalek struggle is thus a pitting of dedication to Hashem, signified in our parsha by Moshe’s raised arms, against the meaningless toil of human creatures who deny what being human truly means.

While we cannot know the identity of the Amalekites today, the philosophy identified with that people is everywhere around us.  But Yisrael and its understanding of life’s meaningfulness will prevail in time.