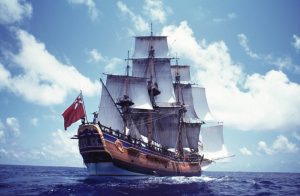 A botanist named Joseph Banks who was aboard Captain James Cook’s 1770 voyage recorded in his diary that while the 106-foot-long Endeavour sailed along the east coast of Australia, native fishermen totally ignored the large boat, the likes of which they surely had never before seen.

Rashi (Beraishis 42:8) quotes the Gemara that explains the reason Yosef’s brothers didn’t recognize him when they appeared before him in his role as second in command of Egypt: They had last seen him beardless and now he was a grown man with a full beard.

But Yosef, the Midrash says, looked just like his father Yaakov, whom the brothers knew as a grown man, if one considerably older than the Yosef facing them.

Perhaps there was another element at play here, too, the sort of cognitive dissonance that might explain the Australian aborigines’ lack of reaction to the sudden appearance of the large ship. It has been speculated that they had no model in their imaginations for a vessel like the Endeavour and so their minds blocked out what was before their eyes, rendering it invisible.

The very last place Yosef’s brothers could have imagined him being was on a throne in a powerful country. They had left him in the hands of slave-traders and “knew” that he was, if he was even alive, toiling as a lowly servant.  Might that “knowledge” have been at least part of why his face didn’t register with them, why they couldn’t see him even as he was right before their eyes?

Even in our times, we see the incredible power of preconceptions, how blinding they can be.  Even when faced with overwhelming evidence for the truth of something, it can still remain for millions of people an unthinkable thought, and render what is right in front of them effectively invisible.