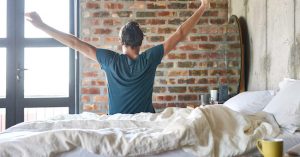 Some people’s default attitude in life is “I really deserve more than I have”; others are prone to feeling that “I really don’t deserve what I have.”

Most people fall somewhere on the spectrum between those two extremes, and most people also may experience one of the attitudes at some points, the other at others.

Menachem Mendel of Kotzk, the Kotzker Rebbe, pointed out that, even though Jews are descended from 12 tribes, the sons of Yaakov, we are called Jews (Yehudim, in Hebrew), after only one of those progenitors, Yehudah, or Judah.

That, he contended, is because Jews are meant to embody the sentiment that yielded Yehudah his name — his mother Leah’s declaration at his birth that she was the beneficiary of what she “didn’t deserve.”

Since Yaakov had children from four women and Leah knew her husband was destined to father 12 sons, she expected to bear only three.  Yehudah was her fourth.  And she acknowledged (“odeh,” the root of “Yehudah”) the fact that she had “received more than my share” (Beraishis 29:35; see Rashi).

Traditionally, the first words to leave a Jew’s mouth each morning upon awakening are “Modeh Ani” (or, for a woman, “Modah Ani”) — “I acknowledge.” The acknowledgment is for having woken up, for life itself.  A Jew is meant to take nothing for granted, to take everything he has as a divine gift.