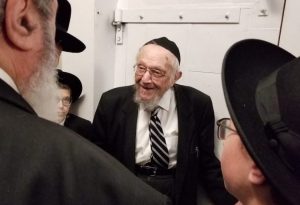 Klal Yisroel mourns the recent passing of HaRav Dovid Feinstein, zt”l. In his quiet and unassuming manner, Rav Dovid — as he was fondly referred to by so many — somehow found time to serve as a wellspring of Torah knowledge, Halachic guidance, and kindness to Jews around the world. This was in addition to shouldering the many responsibilities involved in running his own Yeshiva (the famed Mesivtha Tifereth Jerusalem of Manhattan’s Lower East Side). Amazingly, this towering Torah giant did all this in such a humble and down-to-Earth fashion. As a people, we are left stunned by the sudden loss of this truly irreplaceable treasure.

While I cannot count myself among HaRav Feinstein’s many Talmidim, I feel privileged to have had several memorable interactions with him. After ‘attending’ his New York funeral online, I jotted down some impressions from two of those encounters. I hope others might find as much meaning in these incidents as I did.

May Hashem comfort the family and students of HaRav Dovid Feinstein, zt”l — and may Hashem bless Klal Yisroel with the Torah leadership we so need.

It is the early 2000’s, and unexpectedly, a fellow student at Yeshiva Chofetz Chaim (Kew Gardens Hills, NY) lost his mother. She was a young woman when she suddenly passed away, and I joined some friends in driving from Queens to Brooklyn to make a Shivah visit.

As could be expected, the mood in the Shivah home was quite somber. We tried as best as we could to offer some words of comfort, but I remember feeling that we just had not come up with the right words to say. That’s what we were there to do, right? After some time, our group rose, made our way to the Aveilim, recited “Hamakom Yenacheim Es’chem . . .”, and politely exited the home.

While walking down the driveway feeling inadequate for not having found the words which could comfort the Aveilim, we noticed a car suddenly pull up in front of the home, and out came HaRav Dovid Feinstein — accompanied by some others who had come with him to pay a Shivah call as well.

My friends and I realized this was a special learning moment, so we turned around and went right back into the Shivah house. We wanted to observe Rav Dovid, and learn from him what words of comfort could possibly be offered given the sad circumstance.

After taking a seat in front of the Aveilim, what did Rav Dovid do? Nothing. He sat with the family, and he let them see that he was greatly saddened by their loss. I was waiting for him to suggest something that would help the grieving family make sense of their tragedy — but he offered nothing of the sort. He sat in such a way, that without uttering a word, his pain over their loss was palpable. Amazingly, we could sense the profound sense of comfort that his wordless — but ever so caring presence – was providing the grieving family.

What a simple — yet profound — lesson. The point of making a Shivah visit is to let the Aveilim know that they are cared about, and that others feel the pain of their loss. Contrary to popular misconception, Nichum Aveilim (comforting mourners) is not about coming up with some magic words which are supposed to put grieving minds at peace. Recognizing this fact makes paying a Shivah visit so much less intimidating for the would-be-comforter.

But the lessons learned during that Shivah visit soon grew exponentially. After some time, one of the mourning children said to Rabbi Feinstein, “An earlier visitor suggested that since our mother passed away young, it means she was able to accomplish in a short amount of time all of the good deeds that normally would take most people another 20 or 30 years to accomplish.”

He clearly wanted to hear Rav Feinstein agree, and tell him what kind of a righteous woman his beloved mother must have been. However, as a purveyor of truth, that is not what Rabbi Feinstein chose to do. Instead, he remorsefully shrugged his shoulders, raised the palms of his hands upwards, curled his lips, and solemnly said something to the effect of: “We really don’t know. We have no idea why Hashem runs the world in the manner He does. We just know that He has a plan, and that everything that occurs in this world is somehow part of that plan.”

Rather than be disingenuous and speculate about why Hashem took their mother at such a young age, Rav Dovid chose to be honest with the family — while also teaching everyone in that room a very important lesson. Although suggesting a theory to try and make sense of Hashem’s actions might be soothing in the short term, it’s nothing more than speculation. Thinking that we understand Hashem’s ways may end up doing more harm than good in the long run when our theories fall short.

During the drive back to Queens, I processed what I had just witnessed. I thought of what Yeshayahu HaNavi (55:8-9) taught us about understanding Hashem’s ways:

That ‘coincidentally’ timed Shivah visit left a huge impression on me, and I reflect back on it often. Every now and then, I catch myself arrogantly thinking I might understand Hashem’s ways. Then I think of Rav Dovid Feinstein’s remarks at that Shivah home, and I remember what an exercise in futility such thoughts are. It can’t be done. Instead of trying to tackle the impossible, it is best to recognize that we simply do not have the ability to understand Hashem’s ways. We acknowledge that He is the Dayan Ha’Emes, the True Judge who has a Plan, and we Daven for the day when we’ll have prophecy in our midst once again. At that point, someone will be able to communicate with Hashem and help us understand parts of His Divine Plan. Until then, let’s do our best to live according to His directives, and remember that nothing that happens in this world is by chance — somehow or other, everything fits into the grand scheme of Hashem’s Plan.

Throngs of Talmidim, alumni, and well-wishers are filing into Yeshiva Chofetz Chaim’s new Bais Medrash in Kew Gardens Hills, NY — filling it to capacity. After much Siyata Dishmaya, planning, and construction, the Yeshiva’s spacious new building has finally been completed. After an unforgettable first Shabbos in our new home, an overflowing crowd has gathered for the Chanukas HaBayis celebration of the long-awaited — and much-needed — beautiful new building.

Among that day’s speakers were many distinguished Rabbis and Roshei Yeshiva. They came to wish our Yeshiva — and especially our beloved Rosh HaYeshiva — HaRav Henoch Leibowitz, zt”l — a heartfelt Mazel Tov and much continued success. More than eighteen years have passed since that day. And yet — amazingly — the only remarks I find myself recalling vividly are the brief words spoken by HaRav Dovid Feinstein, zt”l.

Stepping up to the microphone, a twinkle in eyes, Rav Dovid smiled and shared what had been the Brocha that his illustrious father — HaRav Moshe Feinstein, zt”l — regularly offered when invited to attend the Chanukas HaBayis of a new Shul or Yeshiva. Rav Dovid proclaimed: “Zeh HaGadol, Koton Yehiyeh!” — this great one should become small. This was an obvious word-play on the blessing recited at a Bris Milah: “Zeh HaKoton, Gadol Yehiyeh!” — this little one should become big! He explained: Right now, there seems to be so much room in this large new building. However, my Brocha is that the Yeshiva should continue to grow and attract still more Talmidim — to the point where this great new facility just won’t be large enough, and more space will be necessary!

I remember grinning ear-to-ear. What a clever, meaningful, and concise Brocha to offer!

In the midst of this extremely challenging COVID-19 era, I sometimes find myself thinking of that Brocha shared by Rav Dovid Feinstein, zt”l. As Shuls run their socially distanced Minyanim, many have remarked to me how strange it is to Daven in such un-crowded facilities. Yes, we are fortunate to have Minyanim running again, but they are different in so many ways than what we are used to. Perhaps most notably, the lack of “B’Rov Am Hadras Melech” — in multitudes there is glorification of the King (Mishlei 14:28). We find ourselves Davening in rooms which are nowhere near filled to capacity. Our Minyanim are but a shadow of their former selves, and our Shul buildings have ‘reverted’ from being akin to ‘Ketanim’ to feeling like ‘Gedolim’ – i.e., from spaces that were crowded to places that are far too spacious.

‘Zeh HaGadol Koton Yehiyeh‘! May this terrible pandemic end already, so that our Shuls which are now too roomy will find themselves again filled to capacity with joyous Mispalelim of all ages!

We are confident that HaRav Dovid Feinstein, zt”l, is already at work in Shamayim advocating on behalf of Klal Yisroel at this incredibly challenging time. May Hashem respond to our collective Tefilos and bring an end to this awful pandemic as soon as possible!

Rabbi Akiva Males is privileged to serve Young Israel of Memphis (TN) as its Rabbi. He can be reached at [email protected]