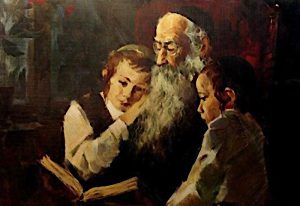 Over the past few weeks, I have been sending out short thoughts on the upcoming parsha to my list of subscribers, who receive links to my Ami Magazine column and other things that might be of interest. (If you want to be on the list, just let me know, at [email protected] .)

While I am not permitted to post the Ami columns here, I hope to share the parsha thoughts each week, be”H.  The one for Haazinu is below:

The Gemara (Shabbos 88a) quotes “a certain Galilean” as having said “Blessed is the Merciful One, Who gave a three-fold Torah [in the broad sense, Torah, Neviim and Ksuvim] to a three-fold nation [Cohanim, Levi’im and Yisraelim] by means of a third-born [Moshe]  on the third day [of separation of men and women] in the third month [Sivan].”

The stress on threes concerning the giving of the Torah, it occurs to me, reflects the essence of mesorah itself, its transmittal. Just as the most elemental physical chain needs three links, so, too, the conceptual one. Each of us is a middle link; we must have received the mesorah and then transmitted it. And our recipients then become middle links themselves.

And, intriguingly, the word employed for the father’s telling is “viyagedcha”, from the root lihagid — which Rashi elsewhere (Shemos 19:3) says implies harshness; and for the grandfather’s telling, the word is viyomru – whose root, omer, Rashi (ibid) characterizes as a “soft” communication.

The Torah may mean to teach here that a father must be an authority figure, and his transmittal of the mesorah more demanding, while a grandfather’s guidance is to be, well, grandfatherly, imparted with a more gentle touch.