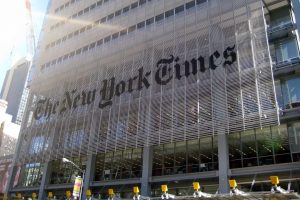 James Bennet, who served as the editorial page editor of the New York Times for the past five years, was recently walked to the journalistic guillotine by the powers-that-be at that once-venerable institution. His sin? A controversial idea appeared on the paper’s opinion page on his watch.

Mr. Bennet’s figurative head rolled out of the Times’ glass doors onto 8th Avenue because of two sets of riots — those on the streets of many American cities and a more genteel but no less disconcerting one in the paper’s newsroom.

The latter unrest followed the Times’ publication of the op-ed at issue, by Sen. Tom Cotton (R-Ark.), who made a case for the deployment of military forces and even, if necessary, the invocation of the Insurrection Act, to control attacks on police and looting of businesses that attended some of the recent public protests.

Mr. Cotton was, of course, echoing President Trump in that proposal. In his remarks at the White House before embarking on his trek across the street to pose with a Bible in front of a church, Mr. Trump called the street violence “domestic acts of terror” and pledged that “If a city or state refuses to take the actions necessary to defend the life and property of their residents, then I will deploy the United States military and quickly solve the problem for them.”

But no less objectionable should be the barring of a citizen, much less a sitting Senator, from expressing his feelings otherwise. And just as objectionable is wailing a post facto mea culpa for not having prevented the expression of that opinion.

But with a considerable number of the Times’ black staff expressing their feeling that publishing Mr. Cotton’s piece had endangered their lives — who knew that Times employees rampage and loot in their spare time? — and other staffers concurring that the op-ed was an odious and perilous thing, the swooning Gray Lady had to pop a pill, and her gentlemen-in-waiting dutifully beat their breasts in remorse.

Although Mr. Bennet and the paper’s publisher Arthur Sulzberger had initially, and sanely, defended the op-ed’s publication on the grounds that it was the paper’s duty to present views at odds with its own opinions, the swell of anger in the newsroom (and, reportedly, a number of cancelled subscriptions) quickly convinced them that Mr. Cotton’s words constituted a veritable call to fascism. Mr. Bennet admitted, or at least claimed, that he hadn’t read the piece before its publication, which an assistant had green-lighted, and thus he became the plumpest sheep to offer the angry snowflake gods. He quickly offered his resignation.

It’s always been an essential part of liberal philosophy to allow people to profess, and others to consider, their opinions. To be sure, an op-ed advocating armed insurrection or the shooting of protesters on sight would arguably be worthy of rejection by a responsible medium. A business is entitled to its standards, indeed obligated to have some.

But is the very idea of invoking an established federal law, in this case the Insurrection Act, which dates to 1807 but was amended as recently as 2007, that empowers a president to deploy military and National Guard troops domestically in limited circumstances, so beyond the pale?

Even conceding — though it deserves no concession — that such deployment here to stop violence on the streets would somehow endanger innocents, would an op-ed advocating, say, the deployment of the military in a hostile foreign country to protect Americans — an act that could much more easily result in casualties — be equally unworthy of publication and discussion?

Someone should introduce the Times’ editorial board to the Talmud, where the concept of presenting a misguided view of a law’s implications for a situation is essential to the ferreting out of the true approach. Putting forth something illogical or unreasonable isn’t merely a stylistic diversion, it is a vital part of the process of getting to truth.

And so, the paper could have best served the public by simply soliciting an op-ed countering Mr. Cotton’s point of view. (Hey, I was available.)

The irony here, for those, presumably including members of the Times’ editorial board, who consider the president himself a danger to American society, is that the paper’s action handed Mr. Trump a golden opportunity on a silver platter to reiterate his contempt for the “lamestream” media. Look, he could say (and did), the “fake media” are afraid to countenance any point of view that differs from their own.

And, at least this time, at least one medium could have no reasonable rejoinder.