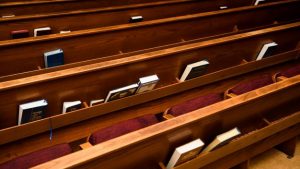 Surprisingly (he said with sarcasm), I’ve been giving some thought to the current pandemic.

Specifically, to the unprecedented closures of shuls and yeshivos.  In the absence of a prophet, no one can claim to know “why” any challenge or adversity happens. But it is a Jewish mandate to introspect at such times, as per the Talmud’s exhortation about personal adversity (Berachos 5a).

Might there be some grounds for introspection about why the particular challenge we face today has resulted in the first-ever-in-modern-history closing down of Jewish places of worship and study, and the resultant confinement of many to their homes?

What occurs to me are two things, discrete but in no way incongruous.

The first is that we may not have been treating our places of religious gathering, particularly shuls, with the respect and gravity they deserve.  While there are many shuls where services are conducted properly and there is no unnecessary conversing during davening, some shuls, unfortunately, are treated less like mini-Temples and more like men’s clubs, places to gather and schmooze before and after davening rather than holy places for communing with the Divine.  Might our banishment from shul be a reminder to us all of what shul is supposed to be?

Rabbi Moshe Sherer, in his book of essays B’shtei Einayim, brings a thought from the Reisher Rov, Rav Aharon Lewin, on the verse that states: ‘My house will be called a house of prayer for all the nations” (Yeshayahu, 56:7.)  Reading the word “for” as “to,” Rabbi Lewin remarked that a Jewish house, or home, will be seen by others as what they experience only as a house of prayer.  In other words, the ideal Jewish home should be a place permeated with Jewish ideals and practices, a place, no less than shul, of worship.

There may be people who are “shul Yidden” in the sense of never missing a shul service, but whose behavior at home is less exemplary, something that is particularly deleterious to any children living at home.  Such people, if they exist, might rightly reflect on their “home confinement” as a spur to self-improvement. And, of course, all of us do well to contemplate how we might make our homes not just places to, well, go home to, but holy spaces.

May our introspection lead to yeshuas Hashem kiheref ayin, the “salvation of Hashem” coming “in the blink of an eye.”