A Hard Look at the State of American Jewry 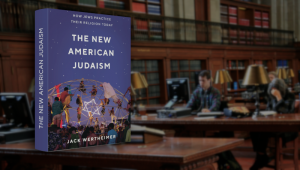 As we observe Chanukah, celebrating (among other things) our survival while our persecutors disappeared, we recall the infamous Look Magazine cover story in 1964. “The Vanishing American Jew” predicted that American Jewry might soon go extinct.

It didn’t; Look did.

Yet the issues that it raised have refused to go away: an intermarriage rate over 70% by the non-Orthodox, and a birth-rate below sustainability by those who did not marry out.

A few things were different back then. First, the threatened disappearance of American Jewry seemed, back then, to be the equivalent of the disappearance of Jewry itself. The US was the largest and most dynamic center of Jewish life. Israel was a third-world backwater – an interesting experiment (to be put to its most serious test three years later in the Six Day War) which had not yet demonstrated its long-term effects.

Second, people did not take seriously the response that if all other Jews walked away from Judaism, the Orthodox would assure its continuity.

Here we are, 55 years (and several Pew reports) later. With the ascendancy of Israel, the possible shrinkage of the American Jewish community does not have the same shock value. The US is not longer the largest, nor the most important, Jewish community. Orthodoxy, meanwhile, has made good on its threat of demonstrating viability and continuity. The claim that intermarriage is not so terrible – that it represents a larger pool of people who can identify Jewishly – is still supported by otherwise reasonable people, even as they ignore the data on second- and third-generation progeny of intermarrieds, and their disappeared Judaism.

Jack Wertheimer offers a penetrating and objective view of what is happening inside and outside of the American Jewish denominations in his The New American Judaism. He is a Professor of American Jewish History at the Conservative movement’s Jewish Theological Seminary and its former Provost. In the past, he has written critically of his own movement, and praised the accomplishments of Orthodoxy. His book attempts to convey to the reader the here-and-now of the Jewish experience in the US, in whatever shapes and flavors they occur.

I review the book in the current issue of the OU’s Jewish Action. I try generally to let the book speak for itself, by simply assembling a large number of quotes from the text. Is there bias in the review? I suppose there is, as in the work of anyone identified strongly with a particular ideology. I don’t believe that the bias in this case is different from what Orthodoxy has been saying for decades: If you discard normative, robust halachic observance, you will be left with nothing. We said this when Reform was the largest denomination, and seemingly unstoppable. We said this even as Orthodox shuls were ripping out their mechitzos and joining the Conservative movement in the ‘60’s and the decades before. We said this when it looked like we were hopelessly out of touch with reality, and breathing the last breaths of an Old World theology that modernism had passed by.

We said it when it seemed absurd to say so, but we said it anyway, through faith and conviction. Now, decades later, Prof. Wertheimer’s book offers compelling anecdotal and statistical evidence that we were correct.

The value in having this evidence is not, chas v’shalom, to engage in triumphalism. That can’t be the takeaway, given the magnitude of the tragedy of watching the rapid unraveling of the connection of most American Jews to any meaningful Judaism. The takeaways can only be to 1) redouble our efforts at finding the individuals here and there who can still be thrown a spiritual life preserver, and 2) to understand the folly of other groups today who think they will save Torah by watering it down or otherwise distorting its authenticity.

And we should daven that just as Look was wrong, so will we – and that somehow, not all whom we think are lost will be lost. There could be no greater joy than to learn that our predictions are unwarranted.