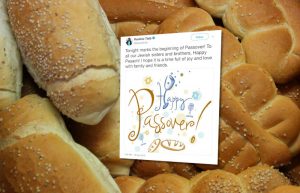 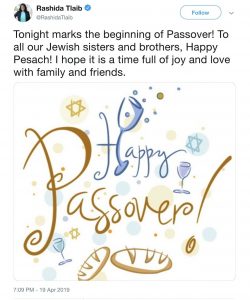 On the first day of Pesach, Michigan Representative Rashida Tlaib offered the “Jewish sisters and brothers” among her constituents Passover greetings, accompanied by a graphic that included two fluffy loaves of bread. A similar faux pas (perhaps, here, articulating the French should-be-silent “s”) was part of the British Labor Party’s seasonal greeting as well.

Ms. Tlaib’s ignorance of one of the most important and widely-recognized elements of Pesach observance nicely paralleled her similar unawareness of the history of the Jews and Eretz Yisrael.

Her unbridled support of the “Palestinian cause” reveals an obliviousness to the uninterrupted Jewish presence over millennia in the land that today comprises the state of Israel, and the even more trenchant fact that the Jews who were expelled from the land after the destruction of the Second Beis Hamikdash, and their descendants over all the subsequent generations, have turned daily to Yerushalayim in prayer and pined for a return to their ancestral homeland.

Although Ms. Tlaib hasn’t publicly expressed an explicit hope for an end to the Jewish presence in the Jewish land, she openly supports the Boycott, Divestment and Sanctions (BDS) movement against Israel, advocates for a “Palestinian right of return” and backs a “one-state solution” – by which she presumably means (based on that “right of return” for all the descendants of all the emigrants from Partition-era Palestine) the transition of Israel, chalilah, into a 22nd Arab country.

The offensiveness of her infamous comment back in January about Senators Marco Rubio and Jim Risch – that, because of their opposition to BDS, they “forgot what country they represent” – has now been complemented by the craziness of her reaction to a report on the most recent conflict between Hamas and Israel in Gaza.

To be specific, to a headline in The New York Times summing up the violent happenings. The headline read: “Gaza militants fire 250 rockets, and Israel responds with airstrikes.”

The 250 rockets eventually became more than 700, and caused scores of Israeli civilian casualties, including three deaths – one of them a Bedouin father of seven; another, a 21-year-old chareidi father of a one-year-old. But, at the time of the Times’ report, the headline was an accurate, straightforward description of events.

Representative Tlaib, though, was outraged. “When will the world stop dehumanizing our Palestinian people who just want to be free?” she tweeted. “Headlines like this & framing it in this way just feeds into the continued lack of responsibility on Israel who unjustly oppress & target Palestinian children and families.”

The headline just stated the bald facts of the conflict: terrorists shot hundreds of rockets at Israeli civilians and Israel ended the onslaught by attacking Hamas military targets from the air. Perhaps Ms. Tlaib would have preferred the chronology to be reversed, with Israeli attacks followed by Hamas retaliation. But time, alas, proceeds in only one direction.

And if the Congresswoman meant to reference the four Palestinian protesters at the border fence who were killed by Israeli forces the previous Friday, well, Palestinian violence at “peaceful protests” is legend. And those killings were preceded by the shooting of two Israeli soldiers there. That pesky arrow of time again.

The Congresswoman might also be reminded that Israel evacuated Gaza in 2005, relocating over 10,000 Jews, ethnically cleansing the region; and that the local residents, “who just want to be free,” freely elected a terrorist organization to rule them – which is what has directly resulted in their current deprivation and suffering.

If Ms. Tlaib – and we might well add her colleague Minnesota Representative Ilhan Omar, who likewise wished Jews a “happy Passover” – really wanted to gain respect from Jewish constituents and other American Jews, they might have issued a full-throated condemnation of Hamas’ most recent attempt to terrorize and murder Israeli civilians. And, for that matter, of Hamas’ general embrace of terrorism, incitement of the populace under its control and sworn goal of erasing Israel from the map.

Shia Muslim Imam and President of the Islamic Association of South Australia Mohamad Tawhidi did precisely that. And he went on to call out Mss. Tlaib and Omar for their own lack of outrage over Hamas’ terrorism.

Earlier this year, while paying his respects to Holocaust victims at Auschwitz, the imam was even blunter about the two Congresswomen, criticizing them as “absolute frauds and Islamists” who “promote hatred against the Jewish people.”

I don’t claim to know what lies in the heart of either woman. But I know what seems absent from both their heads: a recognition of the facts of history, both ancient and current.

As absent, it would seem, as leavened bread in observant Jewish homes on Pesach.