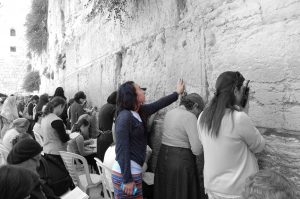 An open letter to Anat Hoffman

Many years ago, we shared a stage for a panel discussion about Israel and Judaism. But you are a well-known public figure and have appeared in countless venues to promote the feminist cause of your group “Women of the Wall,” so I hardly expect you to remember our fleeting interaction.

What you may be more familiar with is my written criticism of your goals and your group, since some of it has appeared in secular media both here in America and in Israel. I want to assure you that it was not intended as a personal attack, but was rather a battle undertaken in the arena of ideas. You have argued that the Kosel Maaravi should be a place where nontraditional public and vocal services should take place, even if such things offend those who most frequent the site.

And I have maintained that the hanhagah in place since the Wall was captured in 1967, effectively enshrining normative Orthodox practice as the standard for congregational prayer at the Kosel, should remain unchanged.

I am writing to you publicly now because of the results of the most recent Israeli elections. As you know, and likely bemoan, the two chareidi parties, Yahadut HaTorah and Shas, made unexpectedly strong showings. Their equally shared 16 Knesset seats represent a nearly 25 percent increase from their previous electoral representation. And together, they now constitute the largest Knesset faction in the government coalition after Likud, with more than three times the seats as the next most successful party.

That being the case, the chareidi parties are virtually assured to be part of Israel’s new government. That observation is not made to rub salt in any wounds, chas v’shalom, but rather as a prelude to a plea.

Realistically speaking, political machinations are not likely to change the longstanding status quo at the Kosel in the foreseeable future. And even if the Israeli courts are successfully enlisted to support the cause of dismantling the traditional public prayer custom at the site, the Knesset may be able to use its legislative power to circumvent such efforts.

In any event, the change for which you advocate is not likely in the cards for now.

Might you consider, in light of that reality, “demilitarizing” the Kosel, and putting your formidable talents and energies into truly important feminist causes, things like advocacy on behalf of equal pay for equal work and effective anti-harassment laws?

For, as you know, bringing loud nontraditional services to the revered site, as you have regularly done, only serves to cause strife. I make no excuses for anyone who berates another Jew, or so much as throws a crumpled piece of paper at her or him, much less for someone who assaults another. Hotheads exist in every group and should be tolerated in none.

But you know that your group’s actions will always meet with obnoxious reactions. Indeed, you have counted on it, making sure that when you arrive at the Kosel there are cameras and media in tow to capture whatever ugliness might result.

Provoking another Jew to overreact may not be as wrong as the overreaction itself. But it, too, is wrong.

And so, just think of what it might be like were you to seek changes to truly improve the lot of women in Israel, rather than a crusade whose only ultimate yield is strife.

Think of what it would be like to join the women who daven at the Kosel regularly with the sole goal of pouring out their hearts to Hashem. What an accomplishment it would be to make the Kosel plaza great again. A place of peace again.

You know that no one – traditional or nontraditional, Jew or non-Jew – has ever been prevented from worshipping there as an individual, and that the great majority of those who flock to the site regularly are Orthodox Jews, who want there to be a mechitzah near the Wall, and want audible public tefillah there to respect the norms born of centuries, indeed millennia, of Jewish tradition.

And you know, further, that until you launched your quest, the Kotel plaza was a place of uninterrupted amity – a Jewish societal oasis, probably the only place on earth where Jews of different religious stripes prayed sincerely side by side.

Might you consider returning it to that, every day of the year?

You and your followers can, as always, promote your religious or societal ideals in any private venue. But please give thought to the good will that you would be showing, and inspiring, were you to decide to make the Kosel once again an undisturbed place of Jewish comity and peace.