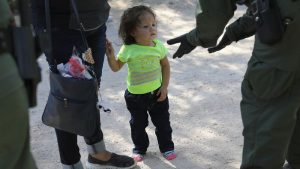 Agudath Israel of America expresses its deep concern and disappointment over the recently adopted policy of separating the members of families who have entered the United States illegally. It is a practice that has caused, and will continue to cause, profound suffering and pain to both parents and children.  We implore that the policy be immediately rescinded, and that affected families be reunited.

The problem of illegal immigration is a serious one, and we support reasonable efforts by the administration and legislature to effectively stem the flow of would-be immigrants who have not been accepted through the legal immigration system.

But the United States, a shining beacon of freedom in the world, must always exhibit humanity and compassion in its laws and policies.  Seeking to enforce our statutes does not relieve us of this moral obligation. The extreme anguish, fear and trauma born of separating undocumented immigrant family members, which is particularly harmful to children, deeply offend our highest values. It is wrong and unjustifiable.

As Jews, we find this practice particularly loathsome. For millennia, Jews in the diaspora have suffered many forms of persecution, including — among the most tragic — the forced breakup of our families. It is a punishment that neither parents nor children should ever have to endure.