Window on the Warped 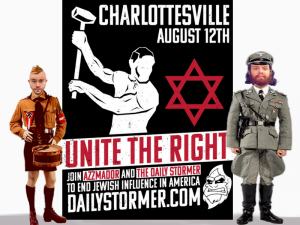 Interested in making a quick $14.88? Well, you might want to consider writing a racist or anti-Semitic article and submitting it to “The Daily Stormer,” one of the more famous neo-Nazi websites that sprout like noxious mushrooms on the internet.

The strange remittance amount the publication, run by a deceptively baby-faced man named Andrew Anglin, offers writers is intended to honor the 14 words of the far right slogan “We must secure the existence of our people and a future for white children”; and the initials of “Heil Hitler” – “h” being the eighth letter of the alphabet. Those neo-Nazis are just so clever.

The site takes its name from the infamous Holocaust-era “Der Stürmer” weekly tabloid published by the notorious Julius Streicher, ym”sh, who was convicted for “crimes against humanity” in the 1946 Nuremberg Trials and hanged at Nuremberg in 1946.

Streicher’s putrid product was read by millions in wartime Germany, and regularly offered up things like a close-up of the deformed face of a man wearing a Jewish cap above the legend “The Scum of Humanity: This Jew says that he is a member of G-d’s chosen people”; a cartoon of a vampire bat with a grotesquely exaggerated nose and Jewish star on its chest; and another of a Jewish butcher sneakily dropping a rat into his meat grinder. He propagated the myth that Jews killed German young people for their blood, and advocated for the annihilation of all Jews.

Streicher famously cried out “Purim Feast 1946!” before the trap door opened beneath him on that Hoshana Rabbah. Having been apprehended serendipitously by a Jewish soldier after the war ended, in his final moment he apparently sensed something deep.

The late Nazi’s new American imitator is more subtle than his predecessor, but not by much.

The Daily Stormer’s stylebook was recently made public by a reporter, and it presents a wondrous window on warped wits.

The 17-page guide starkly states the site’s ultimate goal: “to spread the message of nationalism and anti-Semitism to the masses.” No obfuscation there.

In addition to assorted grammar and spelling rules, the guide helpfully provides long lists of offensive terms to use in the place of “Jews,” “blacks,” “Muslims,” “Hispanics” and “women.”

Still, “the tone of articles on the site,” the guide advises, “should be light,” since “most people are not comfortable with material that comes across as vitriolic, raging, non-ironic hatred. The unindoctrinated should not be able to tell if we are joking or not.”

Joking, though, Mr. Anglin is not. He states that, all kidding aside, he seriously would like to “gas Jews” – though he replaces that last word with a slur.

Astute observers of the modern (or, for that matter, not-so-modern) world have long suspected that a strange rule was being observed, one that The Daily Stormer guide declares outright: “Always Blame the Jews for Everything…As Hitler says, people will become confused and disheartened if they feel there are multiple enemies. As such, all enemies should be combined into one enemy, which is the Jews.”

“This is pretty much objectively true anyway,” the guide takes pains to add, “but we want to leave out any and all nuance.” Nuance, to be sure, isn’t much evident on the site.

“There should be a conscious agenda to dehumanize the enemy,” the document continues, “to the point where people are ready to laugh at their deaths.” Then, to simplify things for readers overly challenged by that sentence, the document boils it down: “Dehumanizing is extremely important.”

And the dehumanized, while they include other groups, must above all be “the Jews.”

“What should be completely avoided,” the guide cautions, “is the sometimes mentioned idea that ‘even if we got rid of the Jews we would still have all these other problems.’ The Jews should always be the beginning and the end of every problem, from poverty to poor family dynamics to war to the destruction of the rainforest.”

Didn’t know rainforest destruction was our doing? Welcome to the twisted world of The Daily Stormer.

Mr. Anglin claims that his site’s popularity is soaring, despite numerous internet domains’ refusals to host it. (He has reportedly moved it to the “dark web,” a part of the internet favored by the worst sort of criminal elements and accessible only with special software.)

But they’re out there, and their malice confirms the Torah’s predictions about Klal Yisrael’s galus and, ultimately, of our uniqueness.