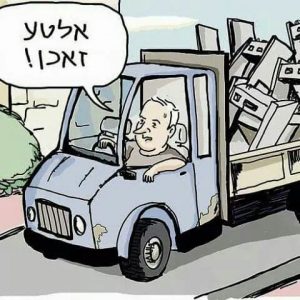 Alas, trips to the supermarket need to be repeated. We tried the Osher Ad, closer to home. As we finished bagging our catch, I handed the cashier our magic piece of plastic.

“Did you hear about our special sale?” asked the middle-aged man. In fact, I hadn’t.

“We’re giving out love for free,” he offered. I tried figuring out how he knew that I was from LA. I was certain that he was going to give me a piece of marijuana brownie to celebrate California’s legalization for recreational use of its most important crop, only hours away at the stroke of midnight.

He rose from his chair (cashiers sit here; they also don’t bag your groceries) and identified himself as a kohen. He placed his hands on my head and offered birkas kohanim/ the priestly blessing.

When he finished, he gave me a hug, which I returned. His warmth was enough to imperil some of the frozen goods in the shopping cart.

Chovos Ha-Levavos, the 11th century work on developing a relationship with G-d that may be our longest-running best-seller other than the Bible, describes his model personality. One of the signs of his true piety is seizing the moment to give people what they need. He has, says Rabbenu Bachya ibn Pakuda, a constant smile on his face. That smile gives people as much of a boost as handing out glasses of cold milk to passersby on a hot day.

It’s a great analogy. But if Rabbenu Bachya meets my cashier, he may have to update his book.