The Price of Tea in Uzbekistan 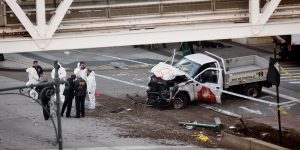 As commuters made their way home from lower Manhattan last Tuesday evening, the police presence was strong, complete with heavily armed officers, helicopters and dogs. At that point, no one knew if the man currently charged with ramming a truck into people on a nearby bike path, killing eight and injuring twelve, was part of a larger terrorist plan or a lone wolf.

The show of vigilance may have made people feel safer. It may even have made them safer, since a broader police presence can, in the event of a terrorist act like last week’s, prevent worse outcomes. The unfortunate fact, though, remains that it is simply impossible to prevent evil people from doing evil things.

To be sure, we must make what reasonable efforts we can to prevent depraved people from entering our country, from plotting to commit violent acts and from carrying them out.

But the carnage caused by Uzbek immigrant Sayfullo Saipov is illustrative of how it isn’t really possible to prevent malevolent individuals – who proliferate so easily these internet days – from wreaking havoc when they choose to.

The accused Manhattan killer was in the country legally, holding a green card, a beneficiary of the “diversity visa lottery,” by which approximately one million foreigners have been awarded legal permanent residency in the U.S., despite having no relatives here or special skills.

President Trump was quick to blame that program for the recent attack, and claimed that New York Senator Chuck Schumer was at fault. The senator was indeed one of those who helped create the program in 1990. He was also, though, among senators who proposed to end it several years ago.

But the issue of the visa lottery has as much to do with what happened in Manhattan last week as it does with the price of tea in Uzbekistan.

The truck terrorist (I’ll drop the “accused”; the fiend has expressed joy over and pride in what he did) seems to have been radicalized after his arrival on these shores, apparently when he wandered from job to job and didn’t land the one he wanted. When he was chosen in the 2010 visa lottery, he was subject to the same vetting procedures as any immigrant, and raised no concerns. Someone approved to immigrate because of special skills or relatives here can also become radicalized.

As can someone born here. The nonpartisan think tank New America tallied the citizenship status of 418 individuals accused of jihadist terrorism crimes in the U.S. since 9/11, and found that fully 85 percent of them were either U.S. citizens or U.S. legal residents – about half of them born American citizens.

And then there is non-jihadi violence against innocents, like last month’s attack in Las Vegas, where a born American killed 58 people and wounded 489. The very day after the more recent terrorist act, a gunman (with no connection to Islam, much less Islamism) walked into a Colorado Walmart and nonchalantly killed three people. And then, this past Sunday, a man shot 26 people to death at a Texas church.

Some, frustrated at the lack of a good blamee (well, it should be a word) for last week’s attack in Manhattan, consider the company that rented Mr. Saipov a truck to bear some responsibility for his actions. But on what grounds should he have been refused? His name? His beard? His religion? His country of origin? Anyone with a valid driver’s license and a credit card can rent a vehicle. Did that fact facilitate last week’s violence? Surely. Can it be applied selectively without violating federal law? Just ask a lawyer.

Restricting immigration may be a good idea (though if Uzbekistan is blacklisted, that will affect the Bukharian Jewish community still there). Careful vetting of foreigners entering the country surely is. But neither notion is a solution to terrorism. Nor, although a fine idea whose time has long arrived, is tougher gun control.

I have come up with several theoretical but entirely workable ideas for sneaking weapons onto public transportation, including onto planes (no, I’m not telling). I imagine similar ones have been conceived by people inclined, as I am not, to killing or maiming innocents.

So what is the solution to terrorism? A secret: There is none. And no one, or thing, to blame when evil is wrought.

There are prudent steps to be taken, yes. But if we think any or all of them can prevent bad people from doing bad things, or that some policy or law is at fault when they do, we fool ourselves.

We might better ponder a passuk: “If Hashem will not guard a city, in vain does its guard keep his vigil” (Tehillim 127:1).

And recognize the import of its message.