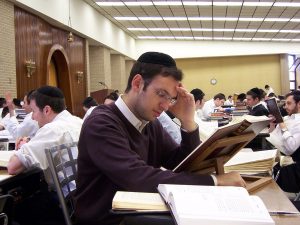 In Does Orthodox Explosion Signal Doom for Conservative and Reform?, Dr. Steven M. Cohen and other researchers present the bold reality of robust Orthodox growth and dramatic non-Orthodox atrophy and population decline, based upon these researchers’ brand new study:

(T)he truly startling situation is among Conservative and Reform Jews. (We combine them to simplify somewhat, recognizing the greater severity in numeric decline among the Reform segment). Here see that the number of 30-39 year olds amounts to just about half the number of the 60-69 year olds. If current trends continue, then, in 30 years, we’ll see about half as many Conservative and Reform Jews age 60-69 as we have today…

Turning to the Orthodox, we find wildly different trends. While just 40,000 are in their 60s, we have triple their number – 120,000 – in their 30s. And, perhaps even more astounding are the number of kids aged 0-9. They amount to 230,000 – over five times the number of people in their 60s. If 100 Orthodox grandparents gathered in shul, they could show their friends photos of 575 grandchildren on their smart phones (but not on Shabbat, of course).

The data clearly show how non-marriage, intermarriage, and low birthrates have taken their toll on Conservative and Reform population numbers. If the Conservative and Reform movements are to arrest their declines, it means helping younger Conservative and Reform Jews find partners to marry and supporting their decisions to have children. It means encouraging more non-Jewish spouses and partners to convert to Judaism. All of these worthy goals can be furthered by more participation in Jewish day schools, summer camps, youth groups, trips to Israel, Hillel, Chabad on campus and other ways of connecting adolescent and young adult Jews to one another have. And, let‘s not forget that parents, grandparents, and rabbis all shape the Jewish lives of children, teenagers and young adults.

The demographic trends we described are already in motion and cannot be changed overnight. The American Jewish community is entering a transitional period, and in particular the Conservative and Reform movements are facing a rocky few decades that will have implications for many of the major Jewish communal institutions. We hope that a dose of hardnosed realism will motivate committed action so that we get through this period with our feet on the right path.

There is a tendency among many – including the authors of the above words – to advise “bandage” solutions to reverse the precipitous decline of non-Orthodox Jewry: get non-Jewish spouses to convert, encourage non-Orthodox students to become involved with Jewish campus groups and congregational youth groups, and so forth. Many of these “doing Jewish” solutions are certainly better than doing nothing about the problem, but they fail to address the real cause of the predicament.

In a wonderful article that addresses this point head-on, Ms. Avital Chizhik-Goldschmidt insightfully argues that it is the very unique values and commitment of Orthodox/Torah Judaism rather than its “doing Jewish” which have enabled the Orthodox community to blossom:

But it’s a fool’s errand. Our methodology for continuity is rooted in the very values that, sadly, many liberal Jews reject — our insularity, our commitment to the collective over the individual, our obligation to a divine value system. Having a few more kids, sending them to sing Shabbat songs once a week for two months out of the year, and then on a Birthright trip a few years later isn’t going to change anything. To me, that’s a band-aid on a bullet wound.

If the Orthodox experience has taught us anything, it is that complete immersion succeeds. Like the immersion in the mikveh, in which every centimeter of the body must touch water, so, too, our commitment requires totality. It is an immersion in our books; immersion in prayer services as punctuation marks for time; immersion in a 25-hour Shabbat experience without smart phones and the internet; immersion in round-the-clock Jewish education, at all costs.

Our commitment to religious values, as much as it is all-consuming, as much as it may jar with secularism, is what keeps us thriving. As the secular Zionist Ahad Ha-Am wrote, “More than the Jewish People have kept the Sabbath, the Sabbath has kept the Jews.” Perhaps it is not just the Sabbath, but all of our laws and social commitments which keep us from fading into a larger human tapestry, by maintaining a strong sense of identity that always comes first.

One can’t have the numbers of the Orthodox without the values — the two go hand in hand.

The strength of the Orthodox community is not rooted in a mere birth rate unsupported by certain principles. Our very demography is rooted in values that run deeply, and which source and sustain our numbers, in the culture of Jewish literacy and in the very texts we construct our lives around, in the way we constantly engage with centuries of Jewish conversation in our study halls and synagogues. It is even in our absolute refusal to touch a light switch on Shabbat, the way we let Judaism define every molecule of our very being — this is where the key to continuity may lie.

Until one values that all-consuming lifestyle — a lifestyle not defined by only tikkun olam and interfaith dialogue — one shouldn’t expect a demographic shift any time soon.

Of course, the sustainability and success of Orthodoxy come from Ha-Kadosh Baruch Hu, but the above is the system that He gave us for spiritual and popular prosperity.

We should not be triumphal; we should instead be immensely appreciative and ever-awed. Adherence to a Torah life has resulted in incredible communal success, while the prognostications of Marshall Sklare and others about the doom of Orthodoxy and the success of the Conservative movement (and the other heterodox movements), based on the need to adapt religion to societal values and needs, have been overwhelmingly disproved.

Despite the clear and current trends and the favorable forecast for the Orthodox community, there is room for concern, based on other trends within Orthodoxy that are not yet properly documented but are anecdotally known to all.

I do not speak about the challenges to Orthodoxy that the Open Orthodox movement presents. This movement, which is now its own separate denomination, has followed the trajectory of the early Conservative movement and has continued to move away from normative Orthodox practices and attitudes, including recently several prominent Orthodox clergy members expressing an openness to intermarriage and the cornerstone Open Orthodox congregation two weeks ago extending mazel tov wishes in its recent bulletin to two men who got “married” (and to a woman for “her aufruf”). Open Orthodoxy jolted out of the Orthodox door long ago and is not germane to this discussion.

Rather, I am concerned about trends in Modern and Charedi Orthodoxy. In Israeli society, there is a very steep attrition rate among Religious Zionist youth, and the situation in America does not appear to be so posivite either. Although the numbers are not as severe among Charedi youth, there is an increasing preponderance of stories of such youth “going OTD”, including children and grandchildren from prestigious rabbinical families. All in all, there is powerful growth, but the substantive cracks cannot be overlooked.

In Modern Orthodoxy, the factors for attrition are: 1) positive immersion in/embrace of secular culture, including its values and practices, which are frequently antithetical to Torah practice and values; 2) an often sterile, uninspiring religious atmosphere. Some of the solutions presented fail to address the underlying issues (factors 1) and 2)) and instead resort to novel pedagogical tactics, or the introduction of Neo-Chassidus, Carlebach-style minyanim and other such endeavors, while ignoring the roots of the problem. (But please see here for a candid assessment and a refreshingly traditional solution.)

Part of the problem in Modern Orthodoxy is an expanding disconnect from the rest of Orthodoxy, and especially from the latter’s Torah leadership. Modern Orthodoxy was previously not a denomination or stream of Orthodoxy per se; it was, rather, an informal way to describe those who were more involved with the outside world and adopted several of its features, in many cases resulting in a diluted religious observance. But it was not a formal movement; rebbeim in Modern Orthodox educational institutions were more often than not of a traditional/”yeshivish” orientation, Modern Orthodoxy did not have its own formulated hashkafa, and there was no religious mandate to be Modern (with a capital M). It was just a pragmatic, situational thing.

(The above issues of Torah leadership and rebbeim are very important for another reason. When institutions insist on hiring and seeking guidance only from those of their own immediate orbit, intellectual cross-fertilization and peer review/checks and balances are sorely compromised. Veering off course, decreased quality and departure from established norms are more prone to result, and one can observe this happening in Modern Orthodoxy – sometimes on an alarming scale.)

I fear that somewhat recent trends of Modern Orthodoxy identifying itself as a distinct religious system and modus operandi will encourage, even unintentionally, factors 1) and 2) above to be more prevalent, thereby triggering even more attrition. (Irrespective of the actual arguments, this approach seems to engender the attitude and mindset of the “Jewish Father” blogger; Rabbi Harry Maryles’ critique is excellent and demonstrates where this is likely to lead.)

Although important higher education/parnassa initiatives have been embarked upon in the Charedi world, the fact that much of the educational system avoids any parnassa training until the point of sha’s ha-dechak or close to it has created some serious problems – which inevitably impact the religiosity of a portion of those caught up in the problems. (Not to mention that this strategy is bound to force people to rely on public assistance and perhaps cut the corners of honesty due to major financial pressures.) The image of new arrivals from Eastern Europe at these shores a century ago abandoning their Torah lifestyle, due to a belief that being frum meant unemployment and poverty, arises in one’s mind as tens or hundreds of thousands of young men receive not even minimal parnassa training until extremely late into the game, if at all. Not to mention lack of instruction in decent and professional communication skills.

Baruch Hashem that the Orthodox community is growing. Hashem’s pledge to perpetuate the generations of those who follow His Torah is being fulfilled before our eyes. Let us do our best to address hashkafic and educational matters in a manner that is conducive to continued sustainability, growth, and adherence to the Torah’s vision and goals.