Rabbis Dancing Around the Pope – Some Thoughts 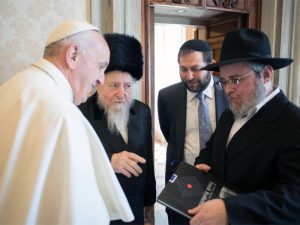 “It” is the May 8 meeting of Orthodox Jews with the Pope at the Vatican. Worthy and principal issues of protection of Jewish cemeteries in Europe and of sexual abuse of children were discussed, with a quite positive outcome, it appears. Fantastic. And the Pope’s interest and willingness to assist is immensely respected and appreciated. However, the session ended with the Orthodox delegates performing a song and dance around the Pope, accompanied by guitar music, chanting the verse from Tehillim, “Orech yamim asbi’ehu, v’arehu biyshu’asi” – “For a length of years shall I satiate him, and I will show him my salvation”. (Tehillim 91)

Secular Jewish and non-Jewish media loved the performance, with the Pope in the middle, moving to the Chassidic-style melody. And while we appreciate the goodwill of all people, it is necessary, in particular as a result of the confusion that this musical moment caused for some among Achenu B’nei Yisroel, to clarify and state that the dance session with the Pope, assuredly celebrating a successful meeting on crucial issues, is not something that can be condoned. For aside from the bizarre imagery of rabbis dancing around the chief priest of the Catholic Church, with a large cross hanging down, and a message of salvation being perplexingly associated by rabbis with the head of the Church (not to mention a lively dance to a catchy tune, with instruments no less, during Sefirah), the imagery directs our thoughts to the words of Rav Soloveitchik in Confrontation, the Rav’s essay delineating acceptable parameters for interaction with the Church:

We cannot command the respect of our confronters by displaying a servile attitude.

Although the Rav’s words were stated in the context of offers of compromise on religious tenets, the bottom-line application here is the same.

Many gedolei Yisroel have looked favorably upon interfaith dialogue that focuses on practical matters, such as combating anti-Semitism and pursuing mutual societal objectives; at the same time, gedolei Yisroel have generally rejected interfaith dialogue of a serious theological nature. Please carefully read the words of Confrontation, where the Rav presents and strongly maintains this approach. It is thus distressing to read that this boundary was seemingly breached during the May 8 meeting, notwithstanding the meeting’s apparently very positive character regarding other issues.

Several years ago, I co-authored an article about a progressive Orthodox and Open Orthodox delegation participating in a major interfaith program in the Galil. Please also see this article about an unrelated and quite controversial interfaith statement by this same general group, and Dr. David Berger’s remarks about this interfaith statement in section IV here. While I feel that the specific interfaith endeavors of this progressive/Open Orthodox group pose a far greater danger than that of the group which met with the Pope on May 8, as evidenced by the former group’s unprecedented statements about the Christian faith as well as by the fact that this group’s interfaith involvement is reflective of a broader hashkafic movement, in contrast with the latter group’s one-time and isolated actions, some of the actions of the latter group clearly crossed a red line, and something needs to be said.