A Shloshim Reflection on My Father’s Life 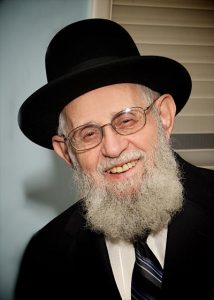 I’m much older than that, and knew and loved him my entire life. But I only really knew him – his full life story – for three decades.

How, for instance, at the age of 14, Simcha Bunim Szafranowicz had insisted that his parents let him go to study in yeshivah – even though what would come to be known as World War II had begun mere weeks earlier, and the family was fleeing the Nazis.

How SS men who had caught up with his family and other refugees from their Polish town, Ruzhan, had killed his uncle in front of him and packed my father and hundreds of Jews into a shul, and set fire to neighboring homes. Preparing to die, the Jews were rescued by a regular German Army official who had passed by and ordered the Jews out. Eliyahu Hanavi, they suspected, in unprecedented disguise.

How the boy’s parents reluctantly gave him their brachah, and said goodbye to him for, it turned out, the last time.

That was the beginning of a journey that would take “Simcha Ruzhaner” to Siberia, and then America, where, as Rabbi Simcha Shafran, he would become a revered, beloved Rav.

He and his remarkable, beloved eishes chayil Puah had three children, my sister Rochel (Zoberman), brother Noach and me. Our dear father was niftar on 20 Kislev.

In the fall of 1939, the boy who would become our father, holding his tefillin and some apples his mother had given him, set out for the Novardoker yeshivah in Bialystok.

En route, he discovered that the Polish yeshivos had relocated to Vilna. In Bialystok, he heeded a voice in his head crying “Simcha! Get on the train!” to Vilna, and managed to pull himself onto the platform between two cars.

Rav Chaim Ozer Grodzinsky, zt”l, famously organized the relocation of yeshivos in Vilna; Novardok settled in the “Gesher Hayarok” shul, and, at the end of 1939, relocated to Birzh, where the yeshivah functioned until the Soviets took over in 1941, and demanded that all refugees become Soviet citizens.

Refusing the offer, which the talmidim did, made them foreign nationals. Those without visas to other countries were put on cattle trains and, weeks later, arrived at a Siberian work camp, where they were ordered to fell trees, chop wood, and harvest and grind grain.

My father was the youngest of the chaburah that spent the rest of the war in the frozen taiga, along with their rebbi, Rabbi Yehudah Leib Nekritz.

When working, the bachurim would review Gemara or recite Tehillim. When not, they studied the few sefarim they had with them – with a chessboard, mid-game, in front of them, in case their anti-religious overseer should stop by.

The exiles used an assortment of tricks to avoid working on Shabbos, and tried to observe Yamim Tovim, clandestinely baking matzos and using a kosher sukkah in the middle of the night.

In 1944, the group was transferred westward, and eventually smuggled into Berlin’s American zone. My father had a bullet wound scar on his arm from when a bribed guard betrayed them.

The refugees organized a yeshivah in Salzheim, near Frankfurt, and resumed their Torah studies. In June, 1947, after establishing contact with a relative in the U.S. willing to sponsor him, my father arrived at Ellis Island and joined other refugees in the reestablished Novardoker yeshivah, Beis Yosef, in Brooklyn.

With the $75 given him by a Jewish social service organization he bought a new pair of tefillin, his old ones having been weathered by Siberia. (He later discovered that his new parshios had been written by his second cousin and namesake, Simcha Bunim Szafranowicz, the Gerrer Rebbe’s personal sofer.)

Another immigrant, Rabbi Yaakov Krett, suggested a shidduch for my father, the daughter of Rav Noach Kahn, a respected Rav in Baltimore, a musmach of Rav Boruch Ber Leibovitz. The young couple had Yiddish in common, and my father, impoverished but resolute, courted my mother by taking walks with her and singing Novardoker niggunim; soon they married.

The couple moved to Baltimore and my father taught at Yeshivahs Chofetz Chaim (“Talmudical Academy”) before becoming the rov of a small shul, Adath Yeshurun – Shadover Shul.

He delivered drashos in Yiddish until more non-Yiddish-speakers joined the shul, and my mother helped him translate his speeches into English. She was a full partner in both his life and the shul, cooking for kiddushim, conducting groups for children on Shabbos afternoons, and much more.

‘Kiruv’ wasn’t a catchword back then, but that was what my parents were doing, and they raised the commitment to Yiddishkeit of untold numbers of people then and for the rest of their lives.

The shul paid little and somehow, even with the counseling, chasunos and hospital visits, my father found the time to attend night school to study accounting. In addition to his rabbinic responsibilities, he became an auditor for the city of Baltimore. He took his obligations seriously and his co-workers were impressed by his integrity. They said they could set their watches by when he left for lunch break (when he would take walks to keep in good health) and when he returned to his desk.

In the 1970s, a minyan near his office in downtown Baltimore wouldn’t hew to my father’s polite request of a mechitza to accommodate a woman who attended davening, so he started a second minyan. Someone who was there at the time recounts that my father was “the rav, the gabbai, the posek, and often the shliach tzibur” as well as “a role model for how a frum person should conduct himself… [and] interact with all of one’s diverse co-workers, creating a true kiddush HaShem. [He] foster[ed] respect towards Jewish people from everyone he encountered.” Days after his petirah, the minyan, which continues to this day, was formally named “The Rabbi Simcha Shafran Downtown Mincha Minyan.”

Throughout his more than 60 years as a Rav, my father made deep impressions on young and old, seekers and scoffers, intellectual and spiritual sorts alike. There wasn’t any trick. With his radiant smile, he just presented himself, and Torah, honestly, without pretensions. Someone once remarked that he had always assumed that, to be a successful Rav in America, a man had to be tall and sophisticated, speak the Queen’s English and hold himself aloof – until he met my father.

When, after more than 40 years of marriage, my mother was nifteres, in 1989, my father was devastated. But the inner strength that saw him through so much emerged with time and he resumed his life with vigor, even marrying again. His second wife, the former Ethel Bagry (Mendlowitz), was beloved to my wife and me, and everything a Bubby could be to our children. My father and “Bobby Ethel” exulted in each other’s families’ simchos for 20 years, and my father cared for her, as he did for my mother, during her final illness.

The neighborhood where my father’s shul existed for many years changed and so, in his 80s, he moved to the Greenspring area of Baltimore County. He built a beis medrash in his new home’s basement, and established a Shabbos minyan. A dedicated group of mispallelim considered it their shul; and my father, their life guide.

He learned and taught Torah, and served as the mazkir of the Baltimore Bais Din. His “vacations” were trips to celebrate the simchos of his children, grandchildren and step-progeny.

He would also yearly address a Ner Yisroel high school Holocaust Studies class (taught by my brother, a rebbi), sharing his wartime experiences with that, and other, rapt audiences.

He walked three miles daily, well into his upper 80s. Only a brain tumor slowed him down. When it became necessary for him to have 24-hour care, he moved in with my brother and his eishes chayil Shalvah, both of whom were deeply dedicated to him. Two days before his petirah, my father was able, with Baltimore Hatzalah’s help, to attend the chasunah of one of their daughters. He gave and received brachos from many of the hundreds in attendance, gave the kallah a special brachah before the chuppah, and one to the new couple afterward.

The morning of his petirah, he made a final request. It wasn’t clear what he sought but his daughter-in-law thought she heard him say “tefillin.” When she asked him if that was what he wanted, he nodded yes, and my brother put tefillin on him. Shortly thereafter, Hakodosh Baruch Hu welcomed my father to his eternal reward.

The final day of shivah, a baby boy was born to my and my wife’s son Mordechai and his eishes chayil Leah Gittel. At the bris, a new Simcha Bunim Shafran was introduced to the world.

Zeh hakatan gadol yihyeh. May he prove a worthy bearer of his name.