Much Ado About an Embassy 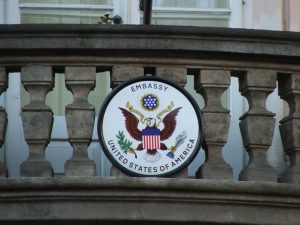 It was back in 1995 that the 104th Congress passed an act that mandated the move of our country’s embassy in Israel from Tel Aviv to Yerushalayim. Although the United States as a country has withheld official recognition of the city as Israel’s capital, the legislative branch has long made its sentiments clear.

The reason the law Congress passed has never been implemented is because Presidents Clinton, Bush, and Obama all viewed it as a Congressional infringement on the executive branch’s constitutional authority over foreign policy. Each invoked the presidential waiver on national security interests as justification for keeping the embassy in Tel Aviv.

President-elect Trump, however, has declared that he will not follow suit, creating excitement in parts of the American and Israeli Jewish publics; and, in other parts, grave concerns about what such a move might portend.

Some feel that the Palestinian leadership, and the Palestinian street that leads the leadership, need to experience an unapologetic and determined American action in recognition of Israel’s legitimacy, in order to “get real” and accept the facts of history. Others, more concerned about the apparent Arab cultural proclivity to violence, see an embassy move as courting danger.

Israeli Prime Minister Benjamin Netanyahu has said that Mr. Trump’s plan to relocate the embassy is “great.” Palestinian Authority President Mahmoud Abbas sent a letter to Mr. Trump predicting that a move of the embassy to Yerushalayim “will have destructive consequences on the peace process, the two-state solution and the safety and security of the region.” P.A. “Chief Islamic Justice” Sheikh Mahmoud Al-Habbash sermonized that if the new U.S. administration carries out its embassy relocation plan, it would constitute “a declaration of war against all Muslims.”

U.S. Secretary of State John Kerry seemed to concur, telling an interviewer that relocating the embassy would cause “an explosion, an absolute explosion in the region, not just in the West Bank, and perhaps [not] even [just] in Israel itself, but throughout the region.”

Former Israeli National Security Advisor Major General Yaakov Amidror was more sanguine, saying that an embassy move “for us [is] very important,” and any Arab protests would “be very minor.”

An intriguing idea for honoring the Trump pledge while limiting the likelihood of a Palestinian meltdown emerged from an Israeli news organization, which cited “senior Israeli Foreign Ministry officials” as contending that David Friedman, the next American ambassador to Israel, might work from an office in Yerushalayim, while the U.S. embassy proper would remain in Tel Aviv.

Surprisingly, Martin Indyk, who served as ambassador to Israel in the Clinton administration and as a special envoy to the region in the Obama administration, endorsed Mr. Trump’s plan. Sort of.

He said it was a good idea, but only if it were married to a broader proposal: making Yerushalayim the shared capital of both Israel and a Palestinian state, with Jewish suburbs under Israeli sovereignty and Arab ones under Palestinian sovereignty – an idea advanced both by President Bill Clinton in his last days in office and by Mr. Kerry in his recent speech; and placing the Old City under a special administration charged with maintaining the religious status quo and ensuring that the three religious authorities continued to administer their respective holy sites. That idea was supported by President George W. Bush during negotiations between Prime Minister Ehud Olmert of Israel and Mahmoud Abbas.

If a clear and unfettered move of the embassy to Yerushalayim in fact takes place, many Jews and others will rejoice. If it doesn’t, though, or one of the alternate plans is chosen, there will be broad disappointment.

Either way, though, something demands our reflection here: Whether or not Yerushalayim will host the American embassy, or some semblance of an official American presence, is not ultimately important. The source of the city’s kedushah, the Har HaBayis, remains “occupied territory” (even if Israel has a degree of security-related control over it). And “East Jerusalem,” whoever polices it, is a de facto Arab city.

The only embassy, in the end, that we rightly pine for is the Divine one, the Shechina for whose return to Tzion we pray daily.

Convincing the world to accept that Yerushalayim is the eternal Jewish capital is not our ultimate goal. The nations’ refusal to understand that truth is an outrage, yes. But, more trenchant, it’s a symptom – of our not yet having merited a third Beis Hamikdash on the site of its predecessors.

And it’s always imperative to address not the symptom but the sickness.