The Western Wall Compromise, and Compromised Commitment to Torah 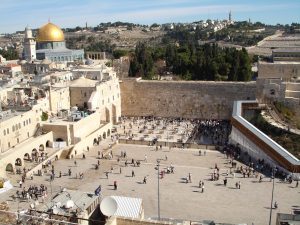 There are compromises that are made in order to securely retain that which is most essential. Such is a pragmatic compromise, and it is manifest by armistice agreements between nations, contract negotiations between employer and employee, and everyday peaceful conduct between competitors and adversaries, as well as between all people who nobly accommodate others even when such accommodation is not ideal. This is one vision of Shalom, which is perhaps most pronounced by the persona of Aharon Ha-Kohen, the Biblical Aaron, who was a master peacemaker among disputing parties, even when one party may have been of the conviction that standing its ground on principle was truly justifiable.

And there is another variety of compromise – ideological compromise – denoted by acceding to a belief or approach which contravenes one’s stated values. In such a case, the compromise is not merely of a practical nature, but is rather a reflection of one or both of the parties actually changing values, or of shifting away, to whatever degree, from the original values that were claimed.

The Western Wall Compromise places before us both of these types of compromise – and they both vest in those who identify themselves as representing Orthodox Judaism.

The Western Wall Heritage Foundation, chaired by Rabbi Shmuel Rabinovitch, the “Rabbi of the Wall”, along with Orthodox members of the Israeli government, entered into a pragmatic compromise this past winter relating to the demand by non-Orthodox groups for non-Orthodox/non-halachic prayer at the Western Wall. Realizing that the heterodox forces were too considerable and mighty to surmount or dismiss, and perhaps sensing that peace and relative religious tranquility were within reach, the Orthodox parties agreed to the Western Wall Compromise, which safeguarded most of the Western Wall tefilla (prayer) area from breach of tradition, while providing for alternative, non-Orthodox services in an adjacent designated location, spanning a relatively small area of the Wall. The Israeli Chief Rabbinate, among many other groups, was not happy about this, but for those Orthodox parties who signed onto the deal, it was a compromise that secured the most essential thing: continued traditional Orthodox prayer at the vast majority of the Western Wall, including the ban on heterodox services and women’s Torah reading there.

As we know, implementation of the Western Wall Compromise has been delayed. This delay was the focus of a protest by over 100 heterodox activists last week, in which they – in violation of the status quo – carried Sifrei Torah to the women’s section for a Rosh Chodesh service. But now, there is a new party that has sided with the heterodox groups:

International Rabbinic Fellowship, which is led by Open Orthodox male and female clergy, has just issued a statement calling for implementation of the Western Wall Compromise. Were the sentiments of the statement reflective of a pragmatic compromise, this article would not have been written. Instead, IRF explained:

The plan, which like any compromise, can be improved upon (e.g. creating a space for Orthodox women’s groups that do not want to engage in full egalitarian prayer but do want to read from the Torah) is a positive step forward to making the Kotel a public place where all Jews can experience the presence of the Divine according to the dictates of their conscience.

In other words, all types of prayer are appropriate for experiencing the presence of the Divine – even if such prayer violates Halacha; and such non-halachic prayer is to be sanctioned and even defended or promoted. IRF is not supporting the Western Wall Compromise merely in an effort to keep the peace or preserve the proper halachic character at the main Western Wall area; rather, IRF is endorsing the legitimacy of non-halachic conduct, “making the Kotel a public place where all Jews can experience the presence of the Divine according to the dictates of their conscience.”

Ne’emanei Torah Va’Avodah is a liberal Orthodox Israeli group, whose governance is in large measure comprised of some of the most prominent leaders of Open Orthodoxy. Ne’emanei Torah Va’Avodah, which is a grantee of the New Israel Fund (whose agenda is notoriously non-traditional and is often inimical to Orthodoxy), has undertaken a comprehensive campaign to promote the Western Wall Compromise and lobby for its swift implementation, as reported here.

The Jewish Press article features a link to a YNet video, in which Rabbi Shlomo Riskin, who is on the boards of YCT, Yeshivat Maharat and Ne’emanei Torah Va’Avodah, states that:

Judaism as a whole and the Western Wall in particular are too important and precious to be left in the sole possession of Orthodox Jews.

And in an article just published in Haaretz, another Ne’emanei Torah Va’Avodah leader advocating for implementation of the Western Wall Compromise presents halachic and hashkafic arguments for such:

Rabbinic literature teaches us that Jerusalem was not apportioned among the tribes of Israel. When the Israelites entered the land after 40 years of wandering in the desert, and each tribe received its inheritance and portion of land, a different status is assigned to Jerusalem. It doesn’t belong to any tribe, because it belongs to all the tribes. A kind of Jerusalem D.C., if you want. This status is not just rhetorical, or a spiritual metaphor. It is established in Jewish law and has concrete implications, for instance in the religious adjudication of property ownership in the city and on leases, such as when two parties have rights to a plot of land, since Jerusalem belongs to everyone. porno izle

Jerusalem, in the Jewish tradition, is not just another place. It’s a place that has a purpose: to connect heaven and earth, divine and human, eternal and temporary. And to be the heart of the Jewish people. A people with the same purpose, of creating connections. If Jerusalem were to belong to one tribe, one group, it would be incapable of serving its purpose.

Yes, Jerusalem belongs to the entire Jewish People, but there is a vast difference between accommodating in order to keep peace and between heartily promoting and extolling the propriety of people to engage in conduct that constitutes Torah violation, by creating halachic and hashkafic rationales to try to persuade readers that the Western Wall Compromise is mandated by the Torah. Pragmatic compromise versus ideological compromise.

We may at times compromise, but God forbid that such compromise represent to us an embrace or an earnest sanctioning of religious conduct or values that desecrate the Torah. Once a compromise of values is made, we forfeit our claim to be truly Torah/Orthodox Jews.

In a 1968 derasha on this week’s parsha, delivered to RIETS Rabbinic Alumni (published here on pages 113-119), Rav Joseph B. Soloveitchik zt”l explained:

It’s very interesting that whenever, with one exception… the Avos (Patriarchs) built mizbechos (altars)… it’s never mentioned that the Avos ever offered a live sacrifice. It’s only twice mentioned… Apparently, by the other mizbechos, no zevachim (animals) were offered, no korbonos (sacrifices)…

What do I mean “offers himself”?…

And that’s what Avrohom taught himself, and he taught others… Whom did he sacrifice? His own independence, his own pride, his own comfort, his own desires, his own logic, his own reasons. He believed. If one believes, it is an act of surrender, sacrifice…

Jewish unity is precious, and concern for our brethren is priceless. But surrendering to the Torah’s dictates, rather than defending and even embracing approaches that violate the Torah, is a sine qua non, as much as we may feel that it is not in the spirit of concern for our brethren and the expression of solidarity with them toward the fulfillment of their aspirations.

The Western Wall Compromise was a tough decision for the Orthodox parties that agreed to it, but it was for them a compromise for the sake of preservation and pragmatics, rather than a championing of egalitarian/heterodox values. To champion such values means to forsake our Torah values; one cannot honestly affirm the Torah while sincerely supporting its violation.

Although this is some of the latest “news” about Open Orthodox controversy, I was asked by numerous readers to present a broad update on the subject in general. I do not anticipate writing about Open Orthodoxy any more on a regular or even an irregular basis (but I will speak out should issues arise that demand a response); nonetheless, as requested by readers, here is a brief recap of some important issues relating to Open Orthodoxy since I last wrote about it several months ago:

There is plenty more.

May we take the lessons of Avrohom Avinu to heart and submit our will to God’s will. Such submission and surrender is the only authentic path to a Torah life and Torah values.