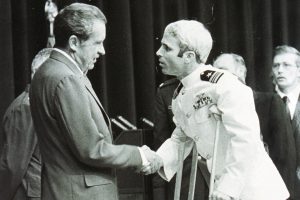 My employer, Agudath Israel of America, as a non-profit organization, is not permitted to endorse any candidate for public office. I, however, write this column each week as an individual, not as an organizational representative. Even so, though, I take no public position on the presidential race.

Aspects of the race, though, do strike me as worthy of consideration.

Like a recent radio interview with Donald Trump. Among the candidate’s many interesting comments over the course of the campaign so far was his assertion last summer that Senator John McCain was “not a war hero.”

This, despite Mr. McCain’s having flown missions during the Vietnam war, having been shot down, seriously injured and captured by the North Vietnamese, having endured torture and languished as a prisoner of war for six years (two of them in solitary confinement) and having refused an out-of-sequence early repatriation offer. Still, said Mr. Trump, Mr. McCain wasn’t “like people who weren’t captured.”

For his part, Senator McCain recently reiterated that he didn’t take the candidate’s comment personally, but he did, he said, object to the insinuation that other POWs were something less than heroic for their endurance of their own captures and imprisonments. “What [Mr. Trump] said about me, John McCain, that’s fine,” said the senator. “I don’t require any repair of that.”

“But,” he continued, “I would like to see him retract [his] statement, not about me, but about the others.”

During a May 11 radio interview, Mr. Trump had the opportunity to do just that, and took it. Well, sort of. At least for a few seconds, before he cast doubt on what he had just said.

Asked about Senator McCain’s wish for a retraction, the presidential hopeful told his interviewer, “Well, I’ve actually done that.” And, to make thing clear (at least for the moment), he added, “You know frankly, I like John McCain, and John McCain is a hero.”

The interviewer, seeking clarity, asked if that meant that Mr. Trump then regretted his earlier comments. The response: “I don’t, you know… I like not to regret anything…. And what I said, frankly, is what I said. And, you know, some people like what I said, if you want to know the truth. Many people that like what I said. You know after I said that, my poll numbers went up seven points.”

One wonders who was converted to the Trump candidacy as a result of his demeaning of Senator McCain’s experiences. (Does some sizable number of unrepentant former North Vietnamese lurk within the American electorate?) But, be that as it may, Mr. Trump’s bewildering backtrack was a striking contrast to an American official’s unqualified expression of regret a few weeks earlier.

Gen. John W. Nicholson Jr., the commander of American and NATO forces in Afghanistan, traveled to Kunduz, Afghanistan to issue an unreserved apology to the families of victims of the United States’ bombing of a hospital in that city last year that killed 42 people.

“As commander, I wanted to come to Kunduz personally and stand before the families and the people of Kunduz to deeply apologize for the events which destroyed the hospital and caused the deaths of staff, patients and family members,” he said. “I grieve with you for your loss and suffering, and humbly and respectfully ask for your forgiveness.”

Shortly after the mistaken bombing, President Obama also personally apologized for the carnage in Kundu.

The general and the president likely wish that they didn’t need “to regret anything,” no less than Mr. Trump. But when regret is called for, they feel and express it.

No reader of this periodical needs to be reminded of the fact that feeling regret is a high Jewish ideal, the very fundament of teshuvah. Many of us recite Viduy twice daily, and all of us on Yom Kippur. Regretting a wrongdoing is something for which our illustrious forebears Yehudah and Reuvein are praised, and for which they “inherited life in the next world” and were rewarded as well in this one (Sotah, 7b).

Whether the willingness to feel and express remorse is something desirable in an American president or something that will hinder him in dealing with the challenges of his office is, one supposes, an open question. And how the American electorate feels about the matter is a question open even more widely.

But that, as Jews, we are enjoined to see regret, when it is indicated, as a desideratum, not a weakness, is no question at all.