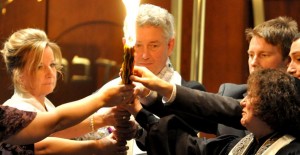 A recent Pew survey brought disheartening news to the American leaders of Reform Judaism: despite investing decades and millions of dollars to increase their presence, they are making little to no headway in Israel. A mere 3 percent of Israeli Jews identify with the movement, and even fewer attend one of the only 42 Reform congregations in the country. Even members may have little understanding of the Reform philosophy, only that it is atraditional and advocates for complete personal autonomy.

Reform is not simply a different nusach (prayer service), a different minhag (custom), or merely about men and women praying without a mechitzah (gender separation). In terms of Jewish practice, Israeli hilonim (non-observant) would be surprised to learn that compared to Reform in America, they are practically haredi. Even half of self-described “secular” Israelis claim to light Shabbat candles (at least sometimes), and one-third keep Kosher at home. Among American Reform Jews, only one in ten usually lights Shabbat candles, and only 7% keep a Kosher home. Hebrew Union College Rabbinical students claim the college itself serves non-Kosher meat.

Israel’s current President, Ruby Rivlin, was a freshly-elected Likud MK in 1989 when Reform Rabbi Uri Regev brought him to the United States to learn more about American Jewry. Upon his return, he told the Israeli media that “as a Jew who does not observe 613 commandments and perhaps not even 13 commandments, I was deeply shocked… Any connection between [Reform] and Judaism didn’t approach reality. I felt as if I were in a church.”

From its beginning, the Reform movement rejected essentially all that we have called Judaism for millenia. The Torah is hardly the final authority for its version of Judaism. Its founders dispensed with the entirety of Jewish Law as found in the Talmud and later authorities, and also severed the historic connection between the Nation of Israel and the Land of Israel. The 1843 Reform Declaration of Principles stated that “we know no fatherland except that to which we belong by birth or citizenship.” Or, put more succintly by leaders of that day: “Berlin is our Jerusalem.” Prayers for return to Eretz Yisrael, the Land of Israel, and the restoration of a Jewish government, were among the first deleted from their prayer books.

Nearly 100 years later, faced with surging anti-Semitism and the rise of Nazi Germany, the movement reversed course. Its 1937 platform endorsed “the promise of renewed life for many of our brethren” in Palestine, and called upon all Jews to “aid in its upbuilding as a Jewish homeland.”

At no point, however, did the movement make aliyah a priority. Even today, the ReformJudaism.org web page on aliyah says only that the movement encourages Jews to “strengthen their ties with Israel” and to participate in “organized visits” (especially under Reform auspices). Reform encourages congregants to visit Israel as tourists, while the overwhelming majority of American olim are Orthodox.

The movement also seems to be openly at odds with the Israeli consensus regarding Israel’s security needs and the dangers of terrorism. The current head of the Union for Reform Judaism (URJ), Rabbi Rick Jacobs, served on the Board of Directors of the leftist and pro-Palestinian J Street, and the ultra-left New Israel Fund which donates to organizations supporting Boycott, Divestment and Sanctions (BDS) against Israel. Jacobs strongly advocated for the Conference of Presidents of Major Jewish Organizations to accept J Street as a member, and even threatened to withdraw the URJ from the Conference after it declined to do so.

These attitudes, to be sure, affect the membership of Reform congregations. A previous head, Rabbi Eric Yoffie, admitted that Reform has produced the most Jewishly ignorant generation in history; in a recent column, Caroline Glick tied this ignorance directly to Jewish leadership in today’s anti-Israel movement.

In addition to all of the above, the Reform movement is also in precipitous decline. Besides having merely 1.7 children per family, 60% of recent marriages have been with non-Jews. Only one of every five intermarried parents raises children as Jewish (more than one in 4 raise them “partly Jewish by religion and partly something else”). Looking at the comparative birth and intermarriage rates, it appears likely that the Orthodox will constitute the Jewish majority within several decades.

While one might expect Reform leaders to focus upon their internal issues, or at most to simply try to expand their Israeli presence, instead they seem bent upon fighting the Orthodox. The movement sponsors the Israel Religious Action Center (IRAC), an organization described in 2005 as “determined to make life miserable for Torah organizations in any manner possible.” At that time, it was suing to prevent building of a religious center in Rechovot – one which had already won City Council approval in three separate votes, and which was supported by 1000 residents’ letters in favor of its construction vs. 200 opposed. That center finally opened last year, after over a decade of harassment.

More recently, IRAC announced that it would be suing ElAl. The announced reason was that when a male Chassidic Jew requested an accommodation so that he would not be seated next to a woman, the helpful steward asked the woman in the next seat if she would prefer an open seat closer to first class. If that sounds like shaky grounds for a discrimination case, that is only because you are not Anat Hoffman, the current director of IRAC. To her, any accommodation for observant Jews is good reason for a lawsuit.

Hoffman began her career running for the Jerusalem City Council on the radical left Ratz-Shinui ticket. Her campaign distributed an orange map of Jerusalem with black splotches representing Orthodox “encroachment” into various neighborhoods. Even many secular residents were incensed by a depiction that, used against different communities, would have been termed racist or anti-Semitic. She was unapologetic; her own informal poll confirmed that they had captured the anti-Haredi vote in that election.

One thing, though, is certain: a properly-motivated person can do far greater damage to the rights of the religious through Israel’s leftist-dominated court system than on a democratically-elected City Council. What is perhaps surprising is that a movement which in America touts its commitment to tolerance, pluralism and liberal values, hired as Director of the Israel Religious Action Center a woman who built her political career upon anti-religious bias.

Hoffman is also the Director of the Women of the Wall, the ideal platform from which to claim to crusade for women’s rights while trampling the rights of thousands of women to pray undisturbed, in traditional fashion, at the Western Wall – a site which she previously stated she would like to see converted to a (secular) monument, with neither mechitzah nor prayers. Women of the Wall arranges monthly disturbances in the women’s section, singing loudly and shouting in an effort to force change upon other women. The organization dismisses and denigrates as “controlled by ultra-Orthodox rabbis” the much larger group of traditional women who pray regularly at the Western Wall and who oppose WOW’s politically-motivated provocations.

The Reform movement funds Ms. Hoffman’s speaking tours of America, in which she distances her Reform audiences from Israel. In her speeches she claims that women do not have full civil rights in Israel, using Women of the Wall’s own antics as her prime example. To be certain, she also points out that American Reform Judaism – that which rejected the entirety of Jewish tradition – is not accepted by Israel’s Chief Rabbinate as authentic Jewish practice.

Two examples illustrate the extent to which Hoffman and her Reform colleagues will exploit what they consider long-discarded Jewish religious symbols for political gain. First, the Reform movement calls its American synagogues “temples” as a conscious repudiation of the special holiness of the Temple in Jerusalem. As recently as 1999, Israel’s Reform rabbis reaffirmed that to them, the Temple and the Western Wall have no special sanctity. Yet Hoffman and the American Reform movement are demanding that the Israeli government provide a plaza for their use, equivalent to the one provided for those who revere the Temple Mount as the holiest place on earth.

And just this week, the Women of the Wall announced that they plan to hold a “Birkat Kohanot” this Passover, with funding from the estate of the late actor Leonard Nimoy – who used the Kohanim’s parting of the fingers while portraying an alien on the Star Trek TV show – to advertise and bus women to the Kotel from across Israel. Yet the Reform movement proudly “rejected the notion of priestly status,” and states that Birkat Kohanim “is not seen in Reform synagogues.” Why are they twisting a traditional practice which they do not follow, and doing so in the faces of traditional Jews whose practices they denigrate and lampoon – if not because WOW hopes to provoke yet another riot, to exploit for future public relations in America?

This is the “contribution” that Reform is making in Israel: denigrating Jewish tradition, fighting religious organizations and the rights of religious Jews, all while making Israel look bad in the eyes of American Jews and a world already delighted to misportray the Jewish state as bigoted. In America, the movement honors intermarried congregants and their non-Jewish spouses as it presides over what sociologist Steven Cohen termed “a sharply declining non-Orthodox population.” Must we wonder why religious MKs are alarmed by the thought of official recognition of the Reform movement as legitimate “Judaism” in Israel?

This article first appeared on Arutz-7.