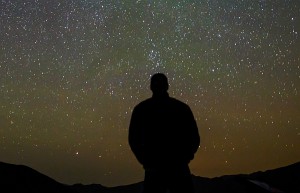 I hadn’t planned to awaken at 3 a.m. on Wednesday night, even though it was the peak time for catching sight of meteors – commonly called “shooting stars” – born of the earth’s yearly passage through the trail of Comet Swift-Tuttle.

But awaken I did, and so I decided to go out on the deck to scan the sky for evidence of what is called the Perseid meteor shower. My wife had never seen a meteor, and so I woke her up, thinking she’d want to join me. (Thankfully, I was right.) And baruch Hashem, we spied a couple of the ephemeral streaks of light in the relatively dark Staten Island sky, and recited the brachah of oseh maaseh bereishis.

Not everyone finds such things exciting; many people find amusement parks, performances or miniature golf more to their liking.

That’s unfortunate, I think. Firstly, because nature is really so much more of a thrill. Watching a caterpillar weave a cocoon or the butterfly it turns into leave the structure; witnessing a spider spinning its web; planting a seed and observing it as it grows into a plant; staring at even a comet-less night sky and contemplating the unimaginable distances of the suns one is viewing – all such astounding realities are more viscerally compelling than anything man-made.

Secondly, though, and more ultimately important, the thrills that nature offers us pave a path from mindlessness toward a most important mitzvah: ahavas Hashem.

At least, that’s what the Rambam states in Hilchos Yesodei HaTorah (2:2):

“And what is the way toward love of Hashem and fear of Him? When a person contemplates [Hashem’s] great and wondrous acts and creations, and perceives in them His indescribable and infinite wisdom, he immediately loves and praises and extols and experiences a great desire to know Hashem…”

Yet, in the Sefer Hamitzvos (Mitzvas Aseh 3), the Rambam seems to take a different tack:

“…we should think about and contemplate His mitzvos and statements and actions, until we attain [an understanding of] Him, and experience an ultimate pleasure in that attainment…”

So, is “the way toward love of Hashem” to contemplate His universe, or His mitzvos?

The two seemingly different approaches to the mitzvah of ahavas Hashem may not be what they seem. As Rav Mordechai Gifter, zt”l, explained it, one might be describing the lens; the other, the view. Rav Mordechai Pogramansky, zt”l, invoked a mashal:

A visitor to a city is shown a series of beautiful works of art in a museum but reacts to each with disdain, claiming to see only messy canvases. Finally, a member of his entourage hits upon the idea of cleaning the fellow’s eyeglasses. The visitor is subsequently deeply impressed by the art.

Before one can perceive Hakadosh Baruch Hu’s grandeur in the astounding magnificence of His creation – which path leads to love of its Source – one must first approach Creation as something other than an accident, as something containing meaning. And the way to attain that foundational, vital recognition is to understand the concept of… mitzvos.

Because doing so impresses on us the idea of right and wrong, forces us to confront a choice: to view our lives as meaningless or as a mandate. And if they are a mandate, there must be a Mandator.

Then, through that clear lens, one can truly see, and appreciate, to the extent a mortal can, the unfathomable wisdom inherent in the wondrous world around us.

It’s unfortunate that “science,” as the word has come to be used, has become the perceived enemy of emunah. In truth, though, it is Scientism – the conviction that nature is all that there is, and that the wonder it engenders has no further point – that stands in opposition to the truism that Creation has a Creator.

Genuine science, though, the Divine implication-sensitive observation of the world around us, and of the worlds light-years (both literally and figuratively) beyond our ken, is a key to the deepest, most genuine feeling a human being can attain.

When, thrice daily, we declare that Hashem satisfies “all living things” with their needs, there is no comparison between just comprehending the simple meaning of the words and pronouncing them with keen awareness of the number of distinct species on earth (10 million on land, and another estimated 20 million marine microbial organisms) and the astounding intricacy of the way they all are provided their species-specific nourishment.