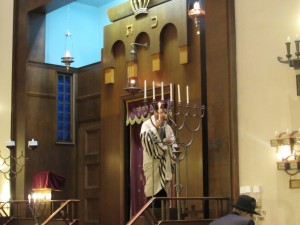 One of the highlights of Chanukah in Washington Heights is the candlelighting at K’hal Adath Jeshurun (KAJ/”Breuer’s”) and the singing of Maoz Tzur by the KAJ choir between Mincha and Maariv. (Please click here, here and here for videos.) This event, aside from being inherently inspiring, undoubtedly inspires various thoughts and feelings on the part of all who attend.

Here are a few of the things that come to mind each year at this time as I look across KAJ and reflect:

That there is probably no other congregation on earth whose history is so identified with Chanukah. An unswervingly devoted group of about a dozen Orthodox Jews who struggled to preserve Torah in Germany almost a century and a half ago in the face of unprecedented assimilation, hiring a dynamic, unapologetic rav and master spokesman (R. Samson Raphael Hirsch) as its leader and seceding from the religiously-compromised communal structure, to emerge as the primary and leading force of Torah in Western Europe, quickly developing into a major congregation of hundreds of families with an extensive chinuch system, igniting a glorious renewal and rededication of Avodas Hashem. The modern-day embodiment of the Chashmona’im and the story of Chanukah. Boundless thanks to Hashem that this congregation was uniquely spared from the Churban of European Jewry.

Preservation of minhagim. Every move and every note is performed precisely as was done in Frankfurt, where the congregation originated. In חזרת הש”ץ (Repetition of the Amidah), the chazzan carefully ascends an octave, slows down and raises his voice as he recites the words שובר איבים ומכניע זדים, as well as על הצדיקים and הטוב שמך ולך נאה להודות (references to the Chanukah victory, the Chashmona’im, and the requirement to offer special thanksgiving to Hashem for the deliverance and miracles of Chanukah). Likewise, the final phrases of על הנסים (“For the miracles”) are chanted with a special, celebratory musical motif. Commenting on the Torah’s presentation of the mitzvah of the Menorah, Chazal laud Aharon for not deviating one iota from that which he was commanded: ויעש כן אהרן – להגיד שבחו של אהרן שלא שינה (“And Aharon performed it accordingly [kindling the Menorah]” – Vayikra 8:3 – The Torah praises Aharon, for he did not veer from the command; he adhered to the mitzvah precisely.) The chazzan at KAJ, as he kindles the menorah with yiras shamayim, precision and care, manifests this same visage of Aharon. (Adherence to the exact Mesorah of the congregation was emphasized by Rav Soloveitchik zt”l, who explained that the traditional musical nusach (rendition) provides the proper interpretation for the words of tefillah. Concerning the Yomim Nora’im, Rav Soloveitchik stated: “The Mesorah of the Nefesh, of experiencing God, is expressed in halachic terms by the Remo, who rules (אורח חיים תריט:א) that one may not alter the liturgy and tunes used by one’s congregation on the High Holidays. The liturgy and tunes employed by each community affect one’s emotional response to the High Holidays and constitute the Mesorah of the Nefesh.“)

Personal inspiration. Although the Gordimer family hails from Telshe and Minsk, and my family’s minhagim are those of northeast Europe (Lita), one of my maternal great-grandfathers came from Germany, from a small town near Brandenburg. He, along with his parents and brothers, moved to Galicia (southeastern Poland-western Ukraine), where he married into a local family with deep Chassidic roots. Nonetheless, in the face of the Haskalah movement making its way east, this “Yekkishe” great-grandfather of mine remained the most religiously-committed of the clan. My great-grandfather brought his family to America in 1920, and as they did not have a menorah with them as they left Europe, my great-grandfather, insistent to light Chanukah candles, carved potato skins into makeshift candleholders and lit for the family en route. Although I never met this great-grandfather, his commitment serves as a personal inspiration. He is my family’s personal connection to the beautiful German-Jewish Chanukah observances that we are privileged to attend this and every year.

May the traditions of Chanukah continue to enlighten and inspire us all and compel us to commit further to our Mesorah.