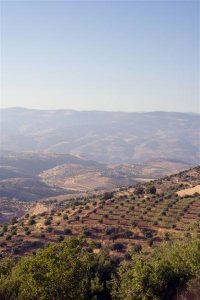 Imagine a man who has spent years waiting for his daughter, his only child, to get married, and then, as he surveys the lavish wedding hall on the day of her wedding, is arrested by police and dragged off to jail. What anguish he would feel.

It would be but the faintest shadow of the agony Moshe must have felt when he was shown the land promised to Klal Yisrael, the land to which he led the people for 40 years, and was told by Hashem that he will not enter it, that he is about to die.

And so, when the Midrash, quoted by Rashi, says (in response to the question of how Moshe could record the fact that he died) that Moshe wrote the words bidema, “in tears,” the simple meaning is that he wrote of his death while still alive. (Torah, being beyond time, allowed for that fact). And that his tears were over his having been deprived of entering Eretz Yisrael.

He cried. Like all us humans, imbued with emotions, do. And the “sin” that prevented him from entering the land, his frustrated hitting of a rock instead of speaking to it, also reflected an all-too-human emotion. Moshe was unique among human beings, to be sure. He was anav mikol adam, more humble than any other person. But a person, all the same; he was a mortal human being.

My rebbe, Rav Yaakov Weinberg, zt”l, would often note that other religions’ heroes are described as faultless superhumans. Not so the personages who are extolled by the Torah, even Moshe Rabbeinu, who was, although closer to perfection than anyone, still human. He erred. He cried.

And that uniqueness of the Torah, Rav Weinberg would stress, is a reflection of the fact that, unlike the “holy books” of various religions, it alone is Hashem’s word, not the product of a fabulist human writer.