The Evidence in the Barrel 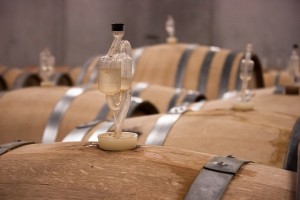 Back in a previous lifetime, when I was a mesivta rebbe, I once heard a menahel exhort our talmidim to not get carried away on Purim. As an illustration, he described how a certain Gadol on Purim simply went into his backyard and swung back and forth on a children’s swing. The implication was that the Gadol hadn’t imbibed much. I wasn’t so sure, myself. Ad d’lo yoda can express itself in different ways.

One thing is certain. Kedoshim u’tehorim on Purim, unleashed from the constraints of full daas, are more often seen singing and dancing spiritedly, even wildly, sharing divrei Torah and divrei sod that one might not ever hear from them the rest of the year.

Needless to say, and unfortunately, some who are less kadosh or tahor can overindulge on Purim and come to act very differently. They may imbibe stronger things than wine (the preferred mitzvah) in excess, even to the degree of actually endangering themselves. That is nothing short of a horrific Purim mask, an aveirah in the guise of a mitzvah.

But when the mitzvah is done right, though, even if the results are something more… well, dynamic than a placid visit to a backyard swing, something important about Klal Yisrael can be revealed. After all, Rabi Iloi (Eruvin 65b) tells us that one way a person’s essence can be discerned is “in his cup,” in his behavior when inebriated.

Something so important, in fact, that I once witnessed a Purim celebration causing an Italian cook at a yeshivah where I once taught to investigate geirus. By her admission, she told me that, over the years, she “had seen many people very drunk, but never so many people so drunk – without any fighting.” All she saw was celebration, friendship, good humor and happiness, and that, she said, had impressed her beyond words. (She was nevertheless dissuaded from her geirus plan.)

Chazal teach us (Shabbos, 88a) that something was lacking at Mattan Torah, and the lack only remedied centuries later in the Persian Empire.

Rav Avdimi bar Chama bar Chassa tells us there that “Hashem held the mountain over the Jews’ heads like a gigis [a barrel]” to force them to accept the Torah. One approach to that statement is that it refers to the experience of being directly addressed by the Borei Olam. Receiving direct communication from Hashem was so overwhelming, so traumatic, so crushing – after all, it caused our ancestors’ souls to leave them, and brought them to beg Moshe to be the only one to directly receive the final eight dibros – that it simply left no other choice but to accept His mission.

Experiencing the Divine fully does not leave one with truly free will to say “no.”

Rabbah comments that the “coercion” remained a remonstration against Klal Yisrael, that it colored our acceptance of the Torah as less than willful – until the “days of Achashverosh.”

For it was then that the Jews chose, entirely of their own volition, to perceive Hashem’s presence where there was no “mountain” held over their heads, where it was not only not overwhelming but not even obvious. Our ancestors chose to see Divine Providence in seemingly mundane, if alarming, political happenings, took the events to heart as a message from Above, and responded with tefillah, taanis and teshuvah. Thus, kiymu mah shekiblu kvar, they “completed” Mattan Torah, supplied what had been missing. The nation truly perceived Hashem, not only in thunder and lightning but in words inscribed on parchment and in a signet ring removed from a royal hand.

Moving back to what is revealed when Yidden have a proper simchas Purim, I’ve often wondered about Rav Avdimi’s strange choice of imagery. “Holding the mountain over their heads like a barrel.” Wouldn’t a mountain looming above be galvanizing enough? What’s with the barrel?

A gigis, however, throughout the Gemara, is a container for an intoxicating beverage. Chazal’s description of the implement of coercion at Har Sinai, in other words, is a beer-barrel.

Rabi Meir in Pirkei Avos (4:20) admonishes us not “to look at the container, but at what it holds.” It wouldn’t seem outlandish to perceive some pertinence of that admonition to the gigis to which Har Sinai is compared. Or, in turn, to Purim, when wine allows the essence of Klal Yisrael, our truest nature, to be revealed.

Don’t dwell, Rabi Meir may be saying, on our compromised acceptance of Hashem at Har Sinai in a state of coercion, but rather at our wholehearted, free-willed embrace of Him in our states of mindless purity.