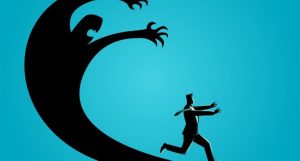 The idea that the prohibition against lashon hora, “speech of evil,” includes speaking negatively about a thing, not just a person, is surprising.

But the sin of the meraglim, the scouts who were sent by Moshe Rabbeinu to spy out the land of Cna’an, who returned with a demoralizing report, is characterized as precisely that: slander of the Holy Land. The Torah describes the scouts’ sin as spreading dibah (Bamidbar 13:32), which Onkelos renders “shum bish,” or “a bad name.”

And Rabbi Elazar ben Parta, in the Talmud, uses the scout narrative to emphasize the gravity of lashon hora in its more common usage:

“If one who defames the wood and rocks of Eretz Yisrael received so severe a punishment, then with regard to one who defames another person, all the more so will he be punished severely.” (Arachin, 15a)

Several of the meraglim’s names include words meaning animals. Might something about lashon hora be implied by that?

The most basic instinct of any animal is self-preservation. (Human beings are the only creatures that can choose, and have chosen, to die willingly for a higher cause.)

And the prime engine of self-preservation is fear. Which is what the meraglim felt, and instilled in the people, by describing the inhabitants of the land as, well, fearsome.

Perhaps lashon hora, too, has at its roots a misguided sense of self-preservation. Slandering another is often the result of feeling a threat – if not against one’s life, then in some less violent, more subtle way.

Which raises the possibility that cultivating one’s self-worth – immunizing oneself, so to speak, against feeling intimidated by others or seeing them as competitors – might be a worthy strategy for undermining the human tendency toward negative speech.

My most recent Ami Magazine column, “A Tale of Two Trials,” can be read here.