Amino Acids and Us 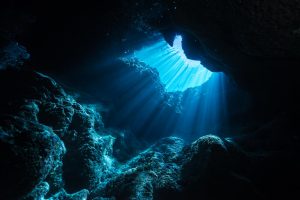 Like many 60-somethings, I remember being informed in grade school of the imminent solution to the mystery of life.

Triumphantly, teachers described an experiment conducted by two researchers, Stanley Miller and Harold Urey, in which molecules believed to represent components of the early Earth’s atmosphere were induced by electricity to form some of the amino acids that are components of proteins necessary for life.

Soon enough, we were told, scientists would coax further artificial formation of primordial materials, proteins themselves and even, eventually, actual life – some single-celled organism like the one from which we ourselves (our teachers dutifully explained) were surely descended.

A half-century later, however, we are left with nothing – not even a pitiful protein – beyond Miller-Urey’s original results.  And even that experiment is now discredited by scientists as having gotten the original atmospheric soup all wrong.

The Miller-Urey memory is an important reminder of how, with all of science’s unarguable accomplishments, every generation’s scientific establishment is convinced it has a handle as well on the Big Questions.  And of how much more common hubris is than wisdom.  It is a thought well worth thinking these days.

No one denies that species, over time, tend to retain traits that serve them well, and to lose others that don’t.

But the appearance of a new species from an existing one, or even of an entirely new trait within a species – things contemporary science insists have happened literally millions of times – have never been witnessed.  There isn’t necessarily anything in the Torah that precludes them from happening, or being made to happen artificially.  But the solemn conviction that they have occurred countless times and by chance remains a large leap of… well, faith.  Which is why “evolution” is rightly called a theory (and might better still be called a religion).

Scientists, to be sure, protest that billions of years are necessary for chance mutations of DNA, the assumed engine of Neo-Darwinism, to work their accidental magic.  A lovely scenario, but one whose hallowing of chance as the engine of all is easily seen as a rejection of the concept of a Creator, Judaism’s central credo.

It also begs the question of how the first living organism might have emerged from inert matter.  Spontaneous generation is generally ridiculed by science, yet precisely that is presumed by the priests of Randomness to have occurred – by utter chance, yet – to jump-start the process of evolution.

What is more, the first creature’s ability to bring forth a next generation (and beyond), would have also had to have been among the first living thing’s talents.  Without that, the organism would have amounted to nothing more than a hopeless dead-end.  No DNA, after all, no future.  And so, a package of complex genetic material, too, would have had to have been part of the unbelievably lucky alpha-amoeba.

And yet to so much as express doubts about such a scenario is to be branded a heretic by the scientific establishment, the Church of Chance.

The issue is not “Biblical literalism,” a decidedly non-Jewish approach.  Many are the p’sukim that do not mean what a simple reading would yield; our mesorah is the key to the true meaning of the Torah’s words; and there are multiple levels of deeper meanings inaccessible to most of us.  The words of Braishis hide infinitely more than they reveal – which is only that the universe was created as the willful act of G-d, and that the biosphere unfolded in stages.  Details are not provided.

The issue is more stark: Are we products of chance, or of G-d?

Jewish belief, of course, is founded on the latter contention, and, as a result, on the conviction that there is a purpose to the universe we inhabit, and to the lives we live.  That what we do makes a difference, that there is right and there is wrong.

Is the very notion of good and evil an illusion, an adaptive evolutionary strategy that provides human beings some cold biological advantage – or does our innate conviction that some human actions are proper and others not reflect a deeper reality?

If humanity’s roots lie in pure chance, there can be no more meaning to good and bad actions than to good or bad weather; no more import to right and wrong than to right and left.  The game is zero-sum. Either we are here by chance or by design.  Either there is no meaningful mandate for human beings; or there is.  And if there is, there must be a Mandator.

And no way to avoid the fact that when children are taught to embrace the one, they are being taught, ever so subtly, to shun the other.