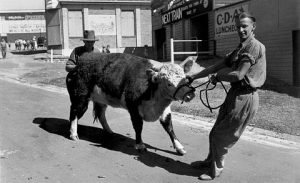 The Rambam famously explains how, in a case where a Jewish court has determined that a couple must divorce, the court can force the husband to hand the get, or divorce document, to his wife. A get, after all, must be given willfully, not under coercion.

The Rambam spells out that, once a valid court has decided that a divorce is necessary, the divorcing becomes a mitzvah and, no matter how unwilling the husband may be, since part of every Jew wishes to do what is required of him, that undetectable but existent will is sufficient to make the handing of the get, even with the husband’s other arm being literally twisted, valid.

The idea of a coerced act being considered willful appears as well at the start of our parshah, with regard to korbanos, “sacrifices.”  Commenting on the word lirtzono, “willingly,” about the offering of a required korban olah (Vayikra 1:3), Rashi quotes Rosh Hashanah 6a: “We force him, until he says ‘I want’ [to do the act].” Even forced, in other words, he also wants.

But the Rambam’s explanation of how a modicum of will exists even in a recalcitrant Jew, while relatively understandable in the case of an action like the handing over of a geht, is much less comprehensible in the case of a korban. Because even if the will to do the right thing lies somewhere in the heart of the sacrifice offerer, a korban must be accompanied by repentance. How can a feeling like that co-exist with coercion?

What might be pertinent here is the observation of Rav Eliyahu Dessler, that love, rather than being something one “falls into” or “is in,” is in fact something generated. By giving. When, for instance, a parent gives to a child, or a spouse to a spouse, love is not only expressed but created.

So, if repentance can be understood as an expression of love for Hashem (and korban, after all, is rooted in karov, closeness), perhaps, the very offering of the korban itself creates a step of repentance, and the supplicant’s “I want” extends meaningfully not only to doing, but to feeling, what is right as well.

To read my most recent Ami column, “The Right to Not Speak,” please click here.

And an exchange with an Ami reader about the Ottawa truckers protest is here.