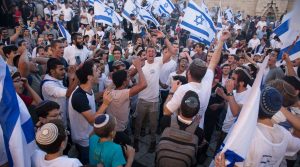 That any sane person could castigate Israel for her response last month to Hamas missiles is astounding.

Hamas, after all, has sent booby-trapped party balloons across the border into Israeli towns in an effort to kill Jewish children, and began the recent war by aiming its rockets at civilians, rejoicing at every Israeli casualty. The Israel Defense Forces, by powerful contrast and as usual, sent messages by texts, phone calls and leaflets warning civilians to evacuate premises housing terrorists or weapons caches before bombing the buildings.

Astounding, but not surprising, of course. We’re still in galus, after all, and where Jews are concerned, common sense often goes missing.

Israel’s reaction to the recent attack on her, moreover, was widely called “disproportionate.” But that judgment presupposes that her goal was punishment. It wasn’t.

The Hamas rockets were merely a pretext for Israel to undertake something more important than teaching terrorists a lesson. They were an opportunity to destroy as much of the murderers’ weapons and tunnels as possible, to prevent further attacks on Israeli civilians in the near future. To speak of “proportionality” in such a mission is incoherent.

Hamas, moreover, started the recent war on a pretext of its own, invoking police actions on Har Habayis and a reclamation of Jewish property in Yerushalayim’s Sheikh Jarrah neighborhood as the reasons for their attack. But those were just convenient excuses. The terrorists’ true aim, as always, was just to kill or maim as many Jews as possible.

So both Hamas and Israel seized chances to do what each already wanted to do: the former, to kill innocents; the latter, to protect them.

But the fact that good and evil here are easily identifiable begs an uncomfortable question: Could Hamas have been — or might it in the future be — deterred from attacking (and, after Israel’s understandable reaction, garnering the support of Israeli Arabs, mendacious media and credulous Congresspeople) by depriving it of pretexts?

The hashkafah that is part of my chinuch has it that the Jewish presence in Eretz Yisrael is a brachah, but not one that changes the harsh reality of galus.

And so, while some Jews, swelling with pride born of Israel’s accomplishments, feel that the Jewish state needn’t pay regard to other nations’ wrongheaded stances, to me, a true understanding of the meaning, challenge and mandate of galus counsels, at least to a degree, deference to the Arabs and the umos ha’olam.

Such concern for so often hostile others is seen by some as weakness or abandonment of Eretz Yisrael. But it is nothing of the sort. It is a simple recognition of reality, and a rejection of the attitude of “kochi v’otzem yadi asah li es hachayil hazeh.”

To be sure, Israel has not only the right but the responsibility to do what is necessary to protect her citizens. But it can’t be ignored that there are actions that go beyond that, and which, even when entirely justified by law and reason, may not be justified by wisdom.

Several weeks before the first rockets were launched from Gaza last month, Israeli police reportedly entered the mosque on Har Habayis and cut the cables to loudspeakers that broadcast Muslim prayers. It was Yom Hazikaron and the move was intended to allow Israel’s president to make a speech at the Kosel. It was also, though, the first day of Ramadan. Was the pre-emptive move justified? Perhaps, yes. Wise? Perhaps not.

Likewise, Jews with claims to homes in neighborhoods like Sheikh Jarrah have every right, both ethically and by law, to reclaim their land. Is their claim justified? Absolutely. Wise? Arguable.

Last month, to its credit, the Israeli government, at the last minute, just before Yom Yerushalayim — when Jewish nationalists traditionally march through the Muslim Quarter and ascend Har Habayis — barred Jews from entering the compound, and rescheduled the march; and the Israeli Supreme Court postponed its hearing in the Sheikh Jarrah eviction case. But it was too late. Arab passions were in a state of frenzy by then, and Hamas took advantage of the anger and made its murderous move.

On Tuesday, the rescheduled march took place. Thousands of Israelis carrying flags assembled at Sha’ar Shechem, singing “Am Yisrael Chai,” before marching through the Old City.

“Take a good look at our flag. Live and suffer,” one marcher shouted in Hebrew through a megaphone at Arab merchants on the other side of police barriers. There was a catcall of “Death to Arabs!”

We are approaching the weeks of the Jewish year when we directly acknowledge, and bemoan, the fact that we’re still in galus.

And, in that state of yet-unfulfilled history, the Israeli government and nationalist Israelis would do well to reflect on the fact that Mashiach has not yet arrived, and that, while there is often a need to act militarily in defense of the populace, in political and social realms, restraint, respect and measured compromises might reflect not cowardice but wisdom.

An opinion piece of mine about the American flag appeared at NBC-Think on Monday, which was Flag Day.  It can be read here.  Please bear in mind that headlines are written by publishers, not writers.