Parshas Naso- An Opportunity, Not an Ordeal 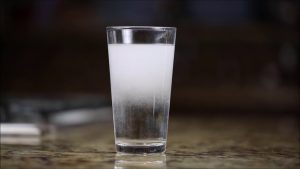 I cringe when I read someone’s portrayal of the law of Sotah ritual as some sort of “trial by ordeal.”

That phrase conjures images like the 17th century Salem witch trials, when Puritans invoked “tests” to determine whether someone was a witch. The accused was subjected to an often life-threatening experience, and only perishing as a result of the ordeal would yield an innocent verdict. When a suspect survived being bound and thrown into deep water, she would be subsequently executed.  And if she drowned (the more common result), the innocent verdict was of little use to the exonerated.

By contrast, the Sotah law kicks in — or kicked in, until the Churban Bayis Rishon (and, according to one opinion in the Talmud was never used) — when a man suspects his wife of being unfaithful, warns her to not seclude herself with a particular other man, and she ignores the warning. The ritual has her drinking a concoction consisting of water, a bit of dirt from under the Temple’s marble floor, a bitter herb and the rubbed-off dried ink of the text of the Torah’s description of the Sotah ritual, including Hashem’s name.

If the woman is guilty of betraying her marriage, the Torah explains, she and the man with whom she sinned will, upon her drinking the concoction, suffer a terrible death.  If she’s innocent, she will suffer no ill effects and, on the contrary, will be blessed with healthy children.

The Sotah-drink ingredients are, if unappetizing, innocuous.  And so, it would take a divine intervention to bring about the punishment.

Interestingly, though, and tellingly, if the wife chooses to simply dissolve her marriage and forfeit the financial support promised her at her wedding, we compel the husband to grant her a divorce, and she suffers no other penalty.

So there is no “trial by ordeal” here. What there is is a way to establish an accused woman’s innocence of adultery, a means of returning love and trust to her marriage.

The entire point of the Sotah ritual, in other words, is to convince a jealous husband that his wife remained faithful to him. Which explains why, unlike in every other case of a suspected crime or sin, we involve a Divine intercession – Hashem’s own assurance that the woman is innocent.

The ritual is not intended as a way to convict, but to restore marital peace. And Hashem Himself, the “third partner” in a successful marriage (Kiddushin, 30b), has a stake here.

Which explains Rabi Yishmael’s comment (Shabbos, 116a) about the ritual: “In order to make peace between a husband and his wife, [Hashem in] the Torah says: My name that was written in sanctity shall be erased in the water.”

If you want to be put on my list to receive links to articles of mine published over the previous week, please just let me know, at [email protected] .