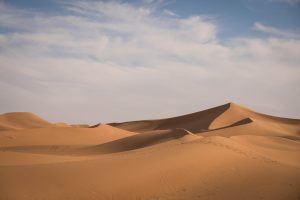 The sefer of Bamidbar (or, to be pedantic, B’midar) begins with the word Vayidaber; and the Talmud Yerushalmi, I’ve seen it cited, even calls the sefer by that latter word.

Both words, as it happens, share the same three-letter Hebrew root, d-v-r, even though one means “desert” and the other “speak.”

What common element of meaning could associate a desert with speech?

The answer may lie in yet another word with the exact same three-letter root, a word that means something else, seemingly, altogether. In Tehillim, we find the phrase yadber amim tachteinu (47:4), which can be translated “He will guide the nations under us.” Although Rashi and the Targum on Tehillim take a different approach to the word yadber, the Gemara (Shabbos 63a) understands the word to mean “guiding,” and the context of the pasuk supports that understanding. The Radak and Ibn Ezra also translate it that way.

Speaking (especially the sort of speech with which the word dibbur is associated: clear, strong words) guides the one spoken to in a particular direction, to hearing the meaning or directive of the speaker. So it isn’t terribly farfetched to imagine that yadber and vayidaber are subtly related.

Midbar, though, seems a puzzle.

What occurs is that a midbar is a desolate, featureless place, usually dangerous, for lack of food and water, and the presence of snakes and such.  But the challenges and dangers may not be what inheres in the word midbar; certainly, the desert through which the Jews were wandering lacked those threats; the well of Miriam, the maan and the cloud of protection made it a safe place.

But it remained one without distractions, and was the path, if a convoluted one, leading the people, guiding them, to their goal, Eretz Yisrael.

Might the word midbar’s essential meaning reflect not desolation nor danger, but the idea of an open path leading to a goal beyond it, toward  which one is being guided?

And, even in our own lives, might obscuring the distractions around and within us help us perceive where we are supposed to go?

If you are interested in reading my Ami column of last week, “The Marijuana Express,” it’s here.